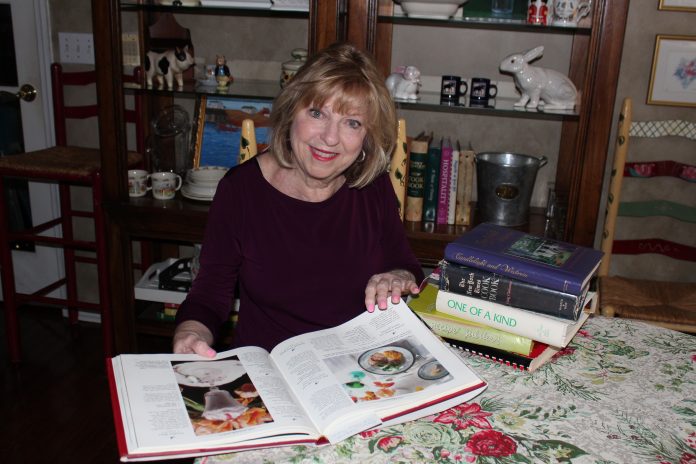 Empanadas
Pastry:
Two 8 oz. pkg. cream cheese
¾ cup softened butter
2 ½ cups flour
½ tsp. salt
1 egg, beaten, for sealing edges of pastry
Preheat oven to 450.
Beat cream cheese and butter until smooth. Slowly add flour and salt . Knead the dough, cover and refrigerate until chilled.
Filling:
¼ onion, minced
2 cloves garlic, minced
4 or 5 slices bacon, cooked and crumbled
1 small pkg. frozen chopped spinach, thawed and water pressed out
1 small container cottage cheese
Dash of nutmeg, optional
1 tsp. salt
Sauté onion and garlic in bacon grease. Add spinach and cottage cheese. Mix all ingredients together well.
Roll out chilled dough on a floured board. Cut into 3 inch rounds.
Place 1 tsp. filling on one side of each round. Fold over and seal the edges with a brush of the egg.
Use a fork to press the edges together.
Pierce the top of the pastry with fork to vent.
Brush top of the pastry with beaten egg.
Place on cookie sheet and place on center rack of oven. Bake for 10-12 minutes at 450. Watch closely and adjust temperature, if needed.

Pork Chops with Tomatoes
4 pork chops
1 medium can tomatoes
1 bell pepper, sliced
1 small onion, sliced
1 cup long grain rice
Salt and pepper to taste
Sprinkle salt and pepper on chops; then brown on both sides in a heavy skillet. Place a ring of bell pepper, a ring of onion and a whole tomato on each pork chop. Cover and cook on low for a few minutes until vegetables are soft.
Add rice, 2 cups water and liquid from tomatoes. Stir rice and water. Cook on medium until simmers, then lower temperature and cover until rice has finished cooking.

Dad’s Cole Slaw
1 tightly packed head of cabbage
1 onion
Olive oil
About 1 capful of white vinegar
Salt to taste
Cut cabbage in half and finely shred; then slice an onion and finely slice it. Drizzle on a small about of olive oil and toss with two forks. Add vinegar to taste; toss. Add salt just before serving.