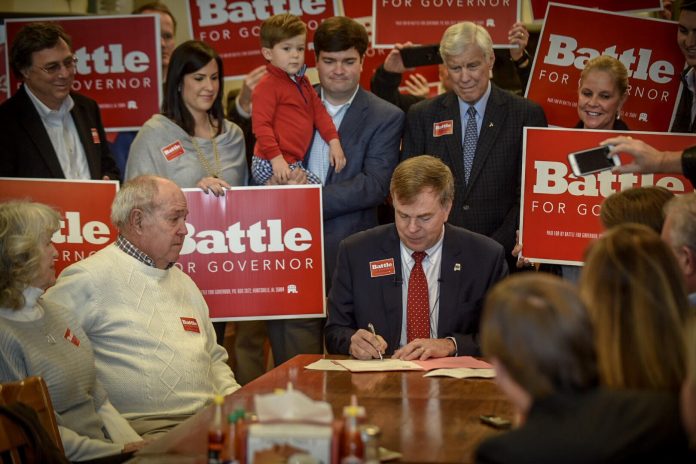 A week after locking down thousands of new jobs for Alabamians, Tommy Battle, a lifelong Republican, qualifies with the Alabama Republican Party for the 2018 gubernatorial race. Battle signed the paperwork surrounded by his family, friends and supporters in a packed restaurant in Hoover, AL.

“I’m running for governor because we’re in a battle for Alabama’s future, and I’m ready to lead us in a new direction. While the ship of state may be settled, it is time to move it forward. Alabama has been stagnant for far too long, and I’m ready to get us moving forward,” said Battle.

Last week, Tommy Battle secured 4,000 new jobs after Toyota and Mazda announced North Alabama as the location of their new $1.6 billion manufacturing facility. Battle was elected Huntsville’s mayor nine years ago. In that time, he’s helped recruit and create more than 25,000 jobs. Every day 13 new people are moving to the Huntsville metro area. That job growth has also helped generate more than $4.1 billion in economic investment for North Alabama. Battle wants to bring that same successful plan to the rest of the state.

“We’ve had a lot of success because our plan works. We’re ready to take that plan to Montgomery and work on behalf of all of Alabama’s 67 counties,” said Battle.

***For more information or if you’d like to interview Tommy Battle, contact Nick Lough, Director of Communication, Battle For Alabama, 256 432-7573, nick@tommybattle.com***