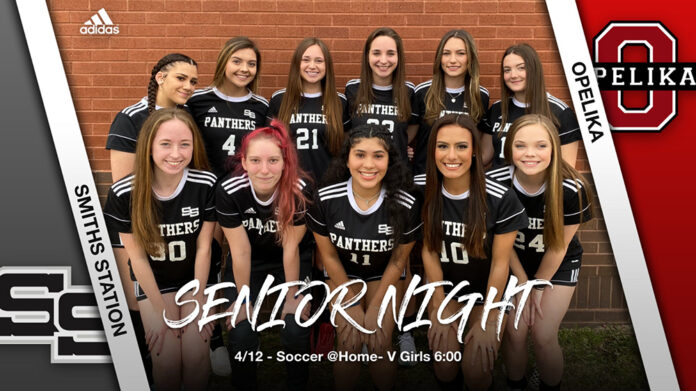 The Smiths Station Girls’ soccer team was on a four-game win streak and had not lost since February before Enterprise beat them 8-3 last Tuesday.

Head coach Dennis Jones describes Enterprise as a “very good, very fast team and they pretty much put it on us.”

The game was tied 1-1 at half before Enterprise pulled away in the second half. Despite the loss Jones was able to find some positives in the outcome.

“I’m really happy that this game happened, because it really showed the girls that if they don’t come prepared and ready to play on any given day against any given team then they can put it on you,” he said. “We were embarrassed that day no doubt, but I’m fortunate that we got this game under our belts just so my girls can see that it is a possibility that we can get beaten pretty badly if we don’t bring our A game every day.”

The loss was just their second of the season and the Panthers wasted no time getting back to form, beating Central-Phenix City 10-0 on April 8.

“It was good for them to get out there, they had just had that embarrassing loss, they were able to get back on the field and really dominate that game,” Jones said. “That was really good to get their confidence back up and get things rolling back on track.”

The 10 goals were spread throughout the offense and all came before the half. Jones thought his girls were more prepared to play after the loss to Enterprise.

The Panthers next game was Senior Night on Monday against Opelika. In their second matchup of the season the Panthers were victorious, winning 1-0 on a goal from senior Emma Tapia.

Despite having a record of 10-2-2 and having already guaranteed spot in the playoffs the Panthers are still trying to figure out their best possible lineup.

“We are moving some girls around now, kind of seeing where they fit for this playoff push,” Jones said.

The changes will be put to the test Thursday when the Panthers play Auburn in a rematch of their earlier matchup. The Panthers won the first game 2-1 on penalty kicks and Jones expects another tough game.

“I think I’ve got everything in place. I’m hoping that we will be able to contain Auburn’s offence. Auburn is very good, they are a very good possession team, so we just have to kind of hold them back from scoring and just hopefully we can get a lucky bounce and get somebody a few opportunities to score.

“It’s very important, it’s not the end of the world if we don’t win this game but it is important. We’ve already at least solidified second place so if we can win against Auburn that would put us at winning the area.”

Since the Panthers won their first game, they are in the driver’s seat to win the area, something they have only done twice in program history according to Jones. However, they have a busy two weeks before they start.

“The girls know that they got a tough road ahead,” Jones said. “We’ve got five games to play in these last two weeks so it’s going to be two weeks filled of games, getting a little but more experience, letting the girls play new positions get used to their positions and just getting ready for the playoffs. I think we’re ready. I think we are going to do good things in the playoffs, but you never know.”