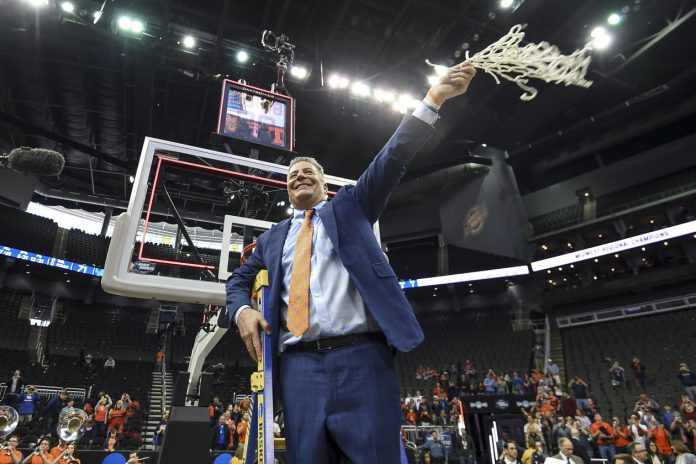 In its 77-71 win over 2-seed Kentucky on Saturday, Auburn advanced to its first-ever Final Four after defeating 1-seed North Carolina and 4-seed Kansas in the span of eight days.
Jared Harper, who finished with a team-high 26 points, including 12 in overtime, said that the team will maintain its confidence heading to Minneapolis to play 1-seed Virginia.
“We wouldn’t have wanted it any other way,” Harper said. “We have confidence in our team. If we do the things we can do, I feel like we can beat any team in the country.”
Harper combined with Bryce Brown’s 24 points to put Auburn just one game away from a national championship berth.
To Brown, the team rallied around Okeke, who tore his ACL in the team’s win over UNC two days earlier.
“It’s amazing,” Brown said. “Above all, I’m just happy we got it for Chuma. This game was specifically for him. We went out there and battled for him.”
Once down by 11 in the first half, Bruce Pearl’s squad cut the deficit to just five going into halftime. Harper scored on a driving layup with 37 seconds remaining in the second half to tie the game at 60 apiece before overtime.
After ultimately relying on a 3-pointer by Horace Spencer to end regulation, Pearl said that you could tell where Okeke was missing.
Despite the miss by Spencer, however, Pearl’s squad is now in uncharted territory.
“We’ll have to play better to advance,” Pearl said. “We’ve got confidence in Horace, Anfernee, Austin and Danjel. They all played a significant role. You could see where we missed Chuma, especially on the defensive end, but we made enough plays to win a regional and go someplace Auburn has never been.”