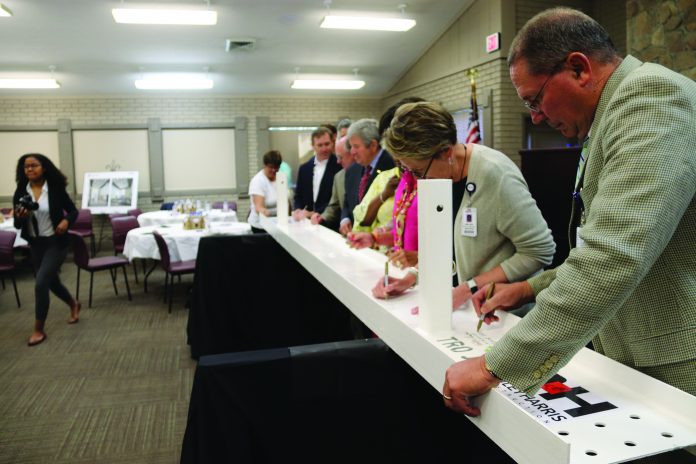 By Savannah Vicker
For the Opelika Observer

On May 22, The East Alabama Medical Center held a celebration for the groundbreaking and construction of their new $39.7 million cancer center, which is slated to open in May 2019.
Once completed, the new center will have 28 treatment chairs and 10 extension chairs for non-oncology patients. Four times the size of the hospital’s current cancer center, the first floor will be used for radiation oncology and the second for medical oncology and a pharmacy.
According to estimates, the new facility is expected to treat nearly 15,000 patients annually, numbers that far exceed the average of the current center, which treats 748 patients with chemotherapy a month and 40 to 50 patients with radiation daily. The number of medical oncologist offices and exam rooms will also increase.
“The physicians and staff in the Cancer Center are very passionate about their work and their patients. However, the existing facility has reached its capacity and has no space to growth in its current location,” said EAMC Director of Public Relations and Marketing John Atkinson. “The new facility will allow staff and patients more space and many more amenities.”
Although the current center has had major positive impact on the community, the development of the new East Alabama Medical Center is a vision of hope and growth, according to incoming EAMC CEO Laura Grill.
“Many, many lives have been saved. Many lives have been extended, and we get positive proof of that each day,” Grill said.
To honor the community, the Cancer Center had community members sign a beam that will be installed in the new facility to display as a visual reminder of those they are serving.
For more information, visit www.cancercenter.eamc.org.