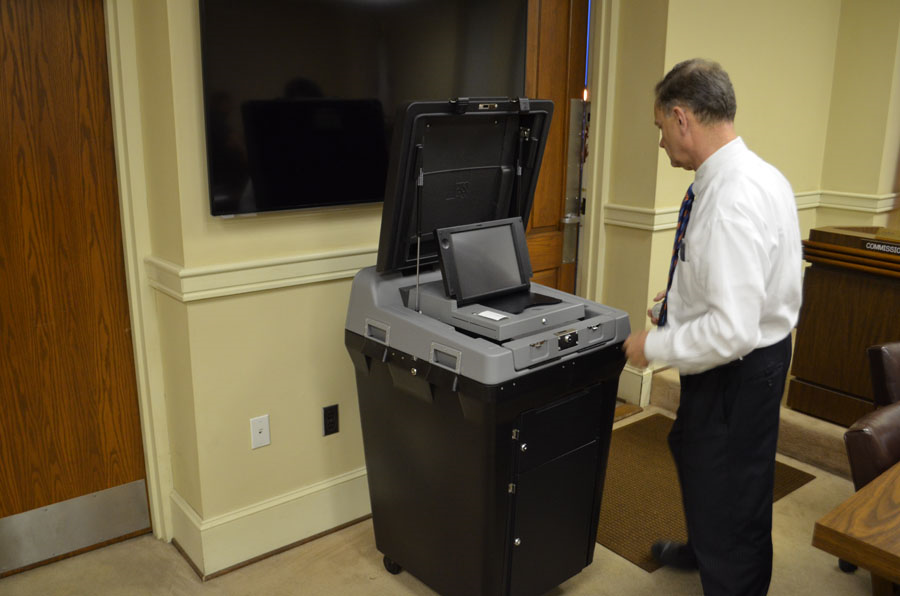 With primary elections occurring next month and the general elections this November, there is some discontent for one county commissioner with the new voting machines in Lee County.

At this week’s county commission meeting, District 5 Commissioner John Andrew Harris expressed opposition to the upgraded voting machines that were replaced state-wide this spring through Election Systems and Software (ES&S).

Harris stated he had issues with the company and the integrity of voting, citing accusations of a history of bribery of other county commissions to implement this particular company’s voting machines.

These machines are approved and certified by the Alabama Electronic Voting Commission (AEVC) and leased to Lee County. The only difference in the new models (Model 100) and the previous ones, other than the external appearance, is that the voter is required to “bubble-in” votes instead of completing an arrow, which is how it has been done until this year, according to Bill English, probate judge and chairman of the Lee County Commission.

The new machines are not touch-screen but do have a small display for messages and will not cause the voter any difference in waiting time, English stated in a description of the new machines.

English did not understand Harris’ issue with the integrity of the company (ES&S) considering this has been the company that supplies Alabama’s counties with their voting machines since 1994. Harris expressed acknowledgement to the fact that there are other companies out there that make voting machines.

“Any company can submit a machine and these machines (Model 100) are in use in every county in Alabama right now,” English said. “The machines we (Lee County) have used the past 20 years are no longer available from the company and no longer in use in any county in the state.”

District 2 Commissioner Johnny Lawrence made a motion to recognize that these machines are the approved voting machine for Lee County and also the authority of the AEVC to make the decision on which voting machines Lee County uses.

District 1 Commissioner Sheila Eckman seconded the motion before the debate was ended by a vote 3-1 with Harris stating “Nay” on both motions to recognize the approved machines and the authority of AEVC.

District 3 Commissioner Gary Long was not present for the meeting.

In other news at the meeting, Martha Leonard spoke again during “public comment from citizens” on the subject of her son who is a inmate and has been transported from Lee County Justice Center to Tallapoosa County Jail and back.

Her accusations include Lee County’s neglect for her son’s nutrition and medical needs.

Sheriff Jay Jones was present for the meeting and declined to comment when given the chance to respond by the commission.

English informed Leonard that the sheriff does not have to answer questions in a commission meeting, but that meeting is a place for people to address the commission and have their say.

Other actions included the Commission announcing the reopening of Lee Road 56 and 146.

English asked if it was safe to say that Lee Road 146 would be completely finished by Thanksgiving or Christmas? To which Lee County engineer Justin Hardee responded: “Lord willing.”

The commission also approved the placement of tar and gravel for dust control on Lee Road 352 for a cost of $8,000, making the road one-way with a speed limit of 25 miles per hour.

The clock atop the Lee County Courthouse will receive a full restoration at a cost of $35,950. The mechanism in the tower is no longer repairable, and the commission had the same company that maintains the clock tower at Samford Hall come out and evaluate what should be done. The funds will come from the Capital Improvement Fund.

The next Lee County Commission meeting will be May 12.