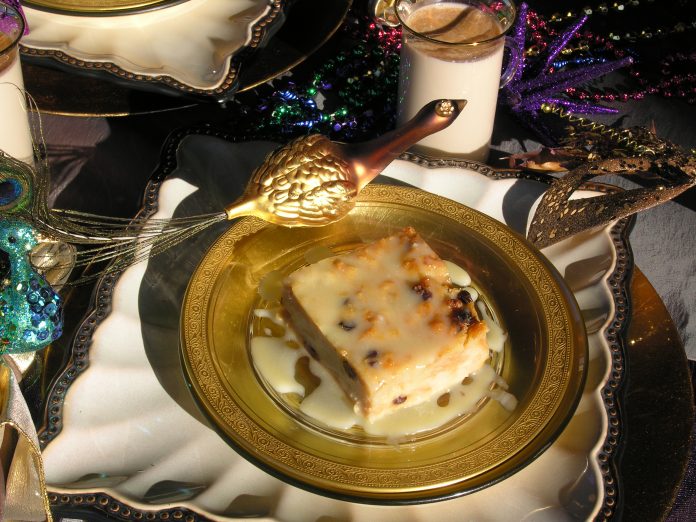 With Mardi Gras coming up Feb. 25, enliven your meals this coming week with Creole and Cajun inspired dishes. Without the frenzy of parades and a carnival atmosphere, celebrate the decorations, music and flavors of News Orleans’ Mardi Gras with a festive dinner at home.

While you are celebrating, don’t forget beloved Opelikan Nancy Parker Boyd, who was a Fox News anchor in New Orleans for 23 years and tragically died in a plane crash last year. For Mardi Gras this year, Nancy was going to reign as Grand Marshal of the Krewe of Nyx parade. She will be honored as the Grand Marshall with her family representing her, including her parents Patsy and Bill Parker of Opelika.
“Nancy was the epitome of everything we believe in — strength, love, caring, sisterhood, compassion, giving back, and so much more,” said the Krewe captain Julia Lea.
Patsy and Bill were in New Orleans recently for the dedication of a beautiful park to Nancy. They will be going to the University of Alabama in a few weeks when Nancy will be listed in the Hall of Fame. They will be returning to New Orleans for Mardi Gras to honor Nancy.
The tradition of Mardi Gras goes back to medieval France and began in America as a French Catholic tradition. Mardi Gras is French for “Fat Tuesday,” which is the last night of dining on rich foods before the season of Lent begins on Ash Wednesday. Lent begins 47 days before Easter.
Known for its party spirit and epicurean specialties like no place else in the country, New Orleans was founded in 1718 by Jean Baptiste Le Moyne de Bienville. The city developed around the Vieux Carré, a central square, which evolved into the French Quarter.

Mobile held America’s first Mardi Gras celebration in 1703. By the 1730s, the event was annually celebrated with parties and festivals in New Orleans. Mardi Gras season kicks off on Twelfth Night.

We recently enjoyed seeing Mardi Gras decorations and savored Louisiana cuisine in Baton Rouge, which also celebrates Mardi Gras with parades and events. When we make trips to Houston, Texas, we stop overnight in Baton Rouge going and coming back home.

We have found two outstanding restaurants, Mansurs on the Boulevard, where we have dined several times, and Parrain’s, which was suggested this time by a friend who used to live in Baton Rouge. If you attend an Auburn football or basketball games against LSU in Baton Rouge, you will want to remember these two restaurants.

Soon after being seated, freshly baked French bread is served in a paper bag to keep it warm. Over the years, we have tried several appetizers, including seafood stuffed mushrooms and gumbo.

On this trip, we ordered the tasty creamy brie and crabmeat soup, and crab cakes with remoulade sauce topped with tomato and corn relish for an attractive presentation.

Except for one time when Don tried the duck, we have ordered the signature red fish roasted on a cedar plank. The fish is superb served with a Creole lemon caper sauce and a side of risotto. While there are other tempting dishes, I don’t think we are going to pass on this anytime we visit.

While we are generally too full for dessert, once we ordered a yummy bread pudding laced with blueberries and topped with a caramel sauce.

Mansurs has been opened since 1989 and moved to its current location in 2001.

Jamie Flick, the choir director at Trinity United Methodist, recommended Parrain’s to us, and it was an excellent choice. The setting is causal and lively. The restaurant opened in 2001 and serves “nouveau Cajun cuisine.”

The menu offers so many good choices. Don tried the gumbo and thought it was delectable with chunks of seafood in a flavorful sauce.

For the entrée, he ordered the combination platter of half crawfish etouffee and half fried tails that he savored every bite. I finally settled on “The Pontchartrain,” which featured seasoned fresh fish fillet sautéed and topped with crabmeat and caper hollandaise sauce. Among the sides, I selected coleslaw, which was tangy with peanuts. I thought it was outstanding and wished I had the recipe.

While in Baton Rouge during the Mardi Gras season, we have picked up a King’s Cake at Ambrosia Bakery that offers assorted King Cakes in different sizes with assorted fillings.

King Cakes are also available at our local grocery stores. I have friends who bake King Cakes, and I thought about baking one. However, when I looked at purchasing purple, green and yellow colored sugars, I decided it would be a better value just to purchase a ready-made cake.

Over the years, we have enjoyed many Creole and Cajun dishes at famous restaurants in New Orleans as well. Commander’s Palace and Brennan’s were always favorites.

Since it was not Mardi Gras season, I was surprised to see that once we started tossing beads a crowded soon gathered, waving their arms and yelling. I quickly discovered that this was not my thing. I decided to gently toss beads to children and seniors instead of people gathering a large number around their necks.

The host for our media group also wanted us to experience the famous Friday lunch at Galatoire’s. Locals are known to have lunch on Fridays, and everyone is celebrating a birthday or some occasion. We have dined there before, so I knew the food would be outstanding.

With mirrored walls and white tablecloths, Galatoire’s has remained one of the city’s legendary restaurants. Jean Galatoire opened the restaurant in 1905 and created a menu of French-Creole dishes with recipes brought from France. From humble beginnings the fifth generation has continued the tradition.

When we arrived at the restaurant for the 11:30 seating, it was as though we were joining a party with tables sporting balloons, and everyone dressed in their Sunday best. Nearly every table had a champagne bucket, or customers were sipping French 75’s, a cocktail made with champagne, gin and Cointreau.

With every seat taken, there was little space between tables, making it feel like you were part of one big party.

For appetizers, our table ordered Galatoire Goute, which included top-notch crabmeat maison and shrimp remoulade. The shrimp were coated in the spicy remoulade, while the crab was tossed with green onions and capers in a creole mustard aioli.

As we were waiting for lunch, a gentleman in the back of the room clinked on his glass to get everyone’s attention. He stood up and held out his champagne glass to toast, saying, “It is now 1 p.m. If you have not ordered lunch yet, here’s to you.”

Laughter filled the room, and we were thankful our red fish topped with lump crabmeat soon arrived. When we left, the lively chatter and party were still going on.

Two restaurants not so well known serving excellent dishes for a reasonable price are Coquette and Willa Jean’s.

If you decide to visit New Orleans, I recommend staying at the Windsor Court Hotel (if you can get a room without taking out a second mortgage). Prices vary according to the season. Plan to leave your car at the hotel and take an Uber to restaurants.

After we came home from Baton Rouge a couple of weeks ago, I selected Louisiana style recipes that great cooks have shared over the years. Look over these for planning your menu. When setting the table, select Mardi Gras colors of purple for justice, green for faith and gold for power.

I haven’t decided which dishes I will be preparing, but my celebration will be thanking God for being back home and for His mercy and a miracle that makes me grateful and humble.

As you think of Nancy, remember you can honor her by donating to the scholarship fund in her name at the Community Foundation Fund.

You can also purchase Nancy’s new book. She wrote her third book “Dinner at Eight, The Talking Plate,” but didn’t have a chance to publish it. Her husband had it printed, and it was recently released. The book is about etiquette for children, and proceeds go to scholarships and other charities.

Galatoire’s Shrimp Remoulade
This is Galatoire’s most popular dish and most requested recipe. The sauce is better made a day in advance and refrigerated. Toss in the shrimp and serve.
¾ cup chopped celery
¾ cup chopped scallions (white and green parts)
½ cup chopped curly parsley
1 cup chopped yellow onion
½ cup ketchup
½ cup tomato purée
½ cup Creole mustard or any coarse, grainy brown mustard
2 Tbsp. prepared horseradish, or to taste
¼ cup red wine vinegar
2 Tbsp. Spanish hot paprika, or to taste
1 tsp. Worcestershire sauce
½ cup salad oil
4 dozen jumbo (15 count) shrimp, peeled, boiled, and chilled
1 small head of iceberg lettuce, washed, dried and cut into thin ribbons
Mince the celery, scallions, parsley and onions in a food processor. Add the ketchup, tomato puree, Creole mustard, horseradish, red wine vinegar, paprika and Worcestershire. Begin processing again and add the oil in a slow drizzle to emulsify. Stop when the dressing is smooth. Chill for 6 to 8 hours or overnight. Correct the seasoning with additional horseradish, if desired, after the ingredients have had the opportunity to marry.
In a large mixing bowl, add the sauce to the shrimp and toss gently to coat. Divide the lettuce among 6 chilled salad plates. Divide the shrimp evenly atop the lettuce and serve.
Serves 6

Bon Ton Café’s New Orleans Style Bread Pudding
Lenda Jo Connell
Bourbon Sauce ½ cup butter, melted
1 cup sugar
1 egg
¼ to ½ cup bourbon or to taste
In a saucepan, melt butter; add sugar and egg, whisking to blend well. Cook over low heat, stirring constantly, until mixture thickens. Whisk in bourbon to taste. Remove from heat. Whisk before serving. Don’t overheat or simmer. Sauce should be soft, creamy and smooth.
Note: If you wish to remove the alcohol, bring the sauce to a boil, stirring constantly, to avoid sticking.
Bread Pudding 1 loaf French bread, at least a day old, (cut into 1 inch squares, about 6-7 cups)
1 qt. milk
3 eggs, lightly beaten
2 cups sugar
2 Tbsp. vanilla
¼ to ½ tsp. cinnamon
1 cup raisins (soaked overnight in ¼ cup bourbon)
3 Tbsp. unsalted butter, melted
Preheat oven to 350 degrees. Soak bread in milk in large mixing bowl. Press with hands until well mixed and all milk is absorbed. In separate bowl, beat eggs, sugar, vanilla and spices together. Gently stir into bread mixture. Gently fold in raisins.
Pour butter into bottom of 9 x 13 inch baking pan. Coat bottom and sides of the pan well with butter. Pour in bread mixture; bake at 350 degrees for 30-45 minutes or until set. Pudding is done when the edges start getting a bit brown and pull away from edge of pan.
Serve with bourbon sauce on the side or pour on to taste. Makes 8-10 servings.

Café au Lait
The famous breakfast drink in the French Quarter makes a fitting finale for a celebration reflecting the traditions and cuisine of the Big Easy.
5 cups strong black coffee
5 cups milk at the boiling point
Pour equal amounts of coffee and milk into cups.