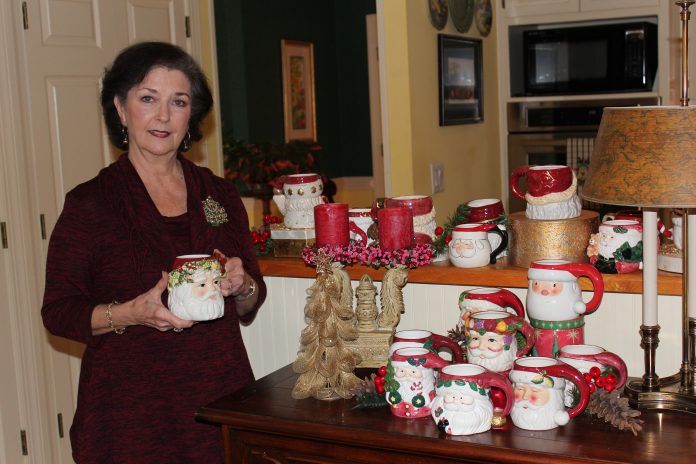 With a festive wreath on the door, the tree laden with ornaments collected over 44 years of marriage and a collection of jovial Santa mugs in the kitchen, the home of Peggy and George Dyar is decorated beautifully for Christmas. Peggy has gathered her favorite recipes for creating a special dinner at Christmas.

Ornaments their children made and ones collected from years of travel decorate their “memory tree.” If Peggy could not find an ornament from a place they visited, she would purchase colorful key rings to tie on the tree with ribbon.

She started collecting Santa mugs 20 years ago and now has 52 mugs as well as ornaments with jolly Santa faces. Peggy has collected the mugs on trips, and some are gifts. “It has to be just the right Santa face,” she says. “The collection ranges with mugs from Sorrento, Italy, to flea markets.”

In the den, Christmas stockings made by Peggy hang from the mantel. Everyone in the family has a stocking except for the new grandchild recently born in Portland, Or. She will have his ready by the time he visits.

Peggy and George have two children. Their daughter, Anna, and husband Nate live in Portland and have two sons, Nolan, 2 1/2, and Alden, 4 months old, while son David lives in Cullman and is a monk at St. Bernard Abby. Brother Benedict Dyar enjoys baking specialty cinnamon raisin bread, Monk Bread, at the monastery bakery. Last year 3,000 loaves were sold at their Bloomin Festival.

Peggy grew up in Newell, a rural community in Randolph County where she and her siblings enjoyed Christmas celebrations with plenty of good food at their grandparents’ home. Her mother is 88 years old and still lives in Newell with Peggy’s brother.

Her mother and both her grandmothers were excellent cooks. “Living in a rural area,” says Peggy, “learning skills at home such as cooking and sewing were part of their entertainment.”

She remembers as a young child her paternal grandmother would let her stand on a stool at the counter when making her famous tea cakes. “Cooking has just been something that has been part of my life,” she says. “I started at a young age and continued.”

After she graduated from Auburn University, Peggy began looking for a teaching position in the area, as she was attending graduate school. While teaching at Opelika High School, she met George, who grew up in Opelika. “George’s mother was an excellent cook too,” she says, “so I have had to continue the tradition.”

While Peggy took breaks when the children were born, she also taught at Morris Avenue School and was the library media specialist at Southview Primary School.

George worked at Davis–Dyar, a business founded by his father, George H. Dyar, and T.K. Davis.

Now that Peggy and George have both retired, they enjoy traveling and spending time at their Lake Martin vacation home.

When their children were growing up, Peggy baked cookies with them during the Christmas season. Following in her grandmother’s footsteps, she stood them on stools, as she taught them to roll out cookies. She remembers they had flour on their faces and everywhere, but it was a fun time.

Their children also enjoyed playing with a plastic nativity set that Peggy now lets her grandchildren arrange over and over.

The Dyars have been active at First United Methodist Church and sing in the choir. The family enjoys the hanging of the greens and the Christmas Eve service.

The weekend before Christmas, the Dyars visit Peggy’s mother and other family in Newell. Now that Anna is married, her family comes for Christmas every other year. On the years family can’t come, the Dyars celebrate with friends.

One Christmas when they were tired of turkey, Peggy enlisted her son-in-law, who does most of the cooking in his family, to prepare the Spice-Rubbed Tenderloin with Mustard-Cream Sauce, a superb entree. The tenderloin is coated with a flavorful rub, while the sauce enhances the flavor.

One of Peggy’s favorite appetizers is the Salmon Spread, a recipe from an Alaskan cruise. The Dyars took a side trip for whale watching, and the river boat captain served the spread. Everyone wanted the recipe. Peggy uses red sockeye salmon for making the tasty appetizer.

Among the recipes are vegetable and salad recipes for delectable sides. Peggy created her own Wassail recipe that fills the house with a wonderful aroma.

Coconut Cake, Caramel Cake and Belgium Mocha Cake are popular dessert choices for Christmas. The frosting for the mocha cake originally included egg yolks. Peggy wrote “Southern Living” to ask about the frosting, and they sent her an adapted version, omitting the yolks.

Along with cakes, she is sharing recipes for a southern Sweet Potato Pie with a Marshmallow Meringue recipe as well as a Bourbon Pie from a restaurant in Meridian, Miss. Brandy Alexander Dessert is her easy, standby choice that she serves with cookies.

Look over Peggy’s recipes and assemble a fabulous Christmas menu for your family and friends.

“Christmas is our favorite time of year,” says Peggy. “I love decorating for the season. We try to make sure we have a lot of family time as well as time with friends.

“The real meaning of Christmas,” she adds, “is the baby born on Christmas, and we don’t forget that.”