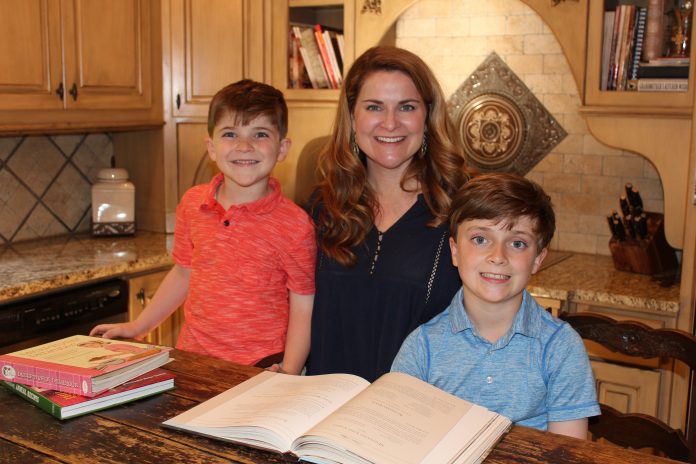 Brilliant red geraniums fill window boxes at the home of Stacey and Andy Jordan. The well decorated home is a reflection of Stacey’s business as a designer. Last October she moved her shop, Oliver Henry, named after their sons, from Auburn to downtown Opelika where she offers specialty candles the entire family helps to create. Stacey has adjusted her working schedule to take her sons to sports and for the family to enjoy dinner together.
Sitting at the antique table in the kitchen where her family dines, Stacey talks about being the mother of two active boys, Oliver, 9, and Henry, who is almost 7, and how she prepares quick and easy meals. Both boys play soccer and basketball, as well as take karate classes.
With growing sons who are active in sports, Stacey has changed how she works. “I used to be in clients’ homes at 8:30 or 9 at night finishing up projects,” she says. “It is not like that anymore.
“We used to have a nanny that helped take care of the boys,” she adds. “When Henry started kindergarten, I began getting off work at 2:30 to pick up the boys. Sometimes I go back to the conference room at the shop if I really need to get something done, but I have made it a priority that now I am the one picking them up from school, going to soccer and basketball games and picking them up at karate.”
When the boys are playing soccer, Stacey will have the slow cookers going, with the Pot Roast her favorite. Other quick meal standbys include All in One Spaghetti, Macaroni and Cheese and Mini Chicken Pot Pies. She will make enough for two nights, so when they come home from soccer, there are leftovers to warm up quickly for dinner. During the week, she is cooking every other night.
They eat at the kitchen table every night. The meals that take the longest to prepare are served on weekends.
When Stacey was growing up in Eclectic, her mother’s side of the family enjoyed getting together for birthdays and holidays to share large meals, while her father’s mother cooked Sunday dinners after church.
An aunt was a caterer, and Stacey’s mother was a southern cook, preparing dishes such as fried pork chops and mashed potatoes. Since her mother worked, Stacey would help her prepare dinner when she got home.
She has always enjoyed being creative. In high school, she would help her teachers decorate for Christmas. Stacey feels her creativity has been inherited from generations. Her grandmother owned a ceramics shop and painted ceramics. Now, her mother teaches ceramics in community centers in Montgomery.
Stacey met Andy, who is from Prattville, in high school. She attended Auburn University, while Andy went to Troy University. They were married after Andy graduated and Stacey was a junior. While she also studied accounting, Andy encouraged her to follow her heart’s desire to work in a creative field. She graduated with a degree in interior design.
After graduating, Andy accepted a position at an accounting firm in Prattville, and they lived in Wetumpka. Since they were always coming back to Auburn for football and basketball games, they decided it would be a great place to raise a family.
Stacey started her interior practice in 2001. She was a buyer for a furniture store for a few years and then became strictly an interior designer. In June five years ago, she opened Oliver Henry in Auburn and then moved the shop to Opelika last fall. She named it after her sons because she wanted to make it family based. Andy is a portfolio manager for Regions.
The giraffe in the logo comes from when she was decorating the nursery in nursery rhymes for Oliver. “Andy came home with a five foot giraffe that had nothing to do with the décor,” she says. “It became a joke with us that you stay in your lane with financials and I will do the decorating. That was part of making it a family business with the giraffe being a joke between us.”
The candles for her shop are made by the family. At first, they had someone pour them, but the quality began going downhill. Andy and Stacey decided they could do it, but it took over a year in development to get it just right. The boys help by putting wicks in the jars, and Andy does the pouring, while she does the packaging. They also sell the candles to other gift shops, with Rhode Island being the furthest.
Stacey enjoys having the shop in downtown Opelika. “The downtown community and other businesses surrounding us are so supportive. We reach a new group of people than when we were tucked away in Auburn. Now we are more visible and have new people coming in the shop. We still get clients that knew us in Auburn, and everyone loves going downtown.”
The Jordans are members of the First United Methodist Church of Opelika. “I pray daily to be a good mother,” says Stacey. “I don’t know how I would walk without guidance and praying for Andy, the boys and myself.
“Having advice from my Christian mother friends is a safe community that helps,” she adds. “It is not only believing in the Lord and following the path He has set before us, but reading about Him and knowing what He wants us to do. Being surrounded with other mothers who are equally faith based and being able to call on them is part of what gets us through as moms.”
On Mother’s Day, Andy has arranged to take the family to a local restaurant for brunch/lunch, and then they will go visit both of their mothers.
“Being a mother is a busy, treasured time,” says Stacey. “I see it going by so quickly. Juggling work and family can be done. I learned that from my mother. I learned from her that a mother’s priority is taking care of her family.”

Macaroni and Cheese
1 cup macaroni, uncooked
2 eggs
1 cup milk
½ stick margarine
Salt and pepper to taste
½ lb. grated sharp cheddar cheese
Cook macaroni according to directions on box and drain.
Add margarine and cheese to cooked macaroni.
In a separate bowl, beat eggs and add milk, salt and pepper.
Pour egg mixture over macaroni and place in an 8 x 8 baking dish.
Cover with grated cheese.
Bake at 375 for 30 minutes or until browned.

Meatloaf
1 1/2 to 2 lbs. ground beef
1 small onion or half of a larger onion, chopped
1/2 cup breadcrumbs (I used Italian for extra flavor)
1/4 cup Parmesan cheese
1/4 cup parsley, chopped
1/4 cup milk
1 Tbsp. garlic, minced (optional)
2 eggs, beaten
Salt and pepper
For the Glaze:
1/2 cup ketchup
2 Tbsp. brown sugar
1 Tbsp. mustard
Dash of Worcestershire sauce
Preheat the oven to 350 degrees.
Place all of the meatloaf ingredients into a bowl, and using your (very clean) hands, combine all of the ingredients. Then, in a separate bowl, mix together all the ingredients for the glaze.
Remove meat mixture from bowl and form into a loaf on a pan or baking dish. Spread about 1/3 of the glaze over the loaf. Place loaf in oven and bake for 45 minutes.
Add about another 1/3 of the glaze after 45 minutes, and then cook for an additional 15 minutes. Once the loaf is done (internal temperature of the meat should be 155 degrees and/or no longer pink), remove from oven.
You can either top with the additional glaze or save it for serving, which is what I like to do.
Slice it up, serve warm with the extra glaze, and enjoy!

Breakfast Muffins
6 eggs
2 cups half and half
½ tsp. salt
¼ tsp. pepper
1 cup Bisquick
Grated cheddar cheese
2 pkg. Bacon Bits
In a large bowl mix together eggs, half and half, salt and pepper.
Line a muffin tin with paper liners or spray with nonstick cooking spray.
Sprinkle a thin layer of bacon bits in each muffin cup, fill 2/3 with mixture, sprinkle cheddar cheese on top and bake for 25 minutes at 350. Makes 18 muffins.

Green Beans
6 slices bacon
2 lbs. rinsed and trimmed fresh green beans or canned green beans
1/2 cup diced yellow onion
1 1/2 cups chicken broth or water
Salt and pepper to taste (I usually don’t add salt because the bacon is plenty salty.)
Cook bacon over medium heat in a heavy 3 qt. saucepan until the bacon is fully rendered.
Do not remove any of the bacon grease – it’s what makes these green beans so amazing!
Add onions and sauté with bacon until transparent.
Add green beans and pepper and stir, making sure bacon drippings are getting mixed in well.
Add chicken broth and reduce heat to low.
Cover and continue cooking the green beans for 30 minutes for canned beans and up to two hours for fresh, stirring occasionally. Make sure there is liquid in the bottom of pot so the beans don’t get scorched.
Check for seasoning levels and add salt and pepper if necessary.