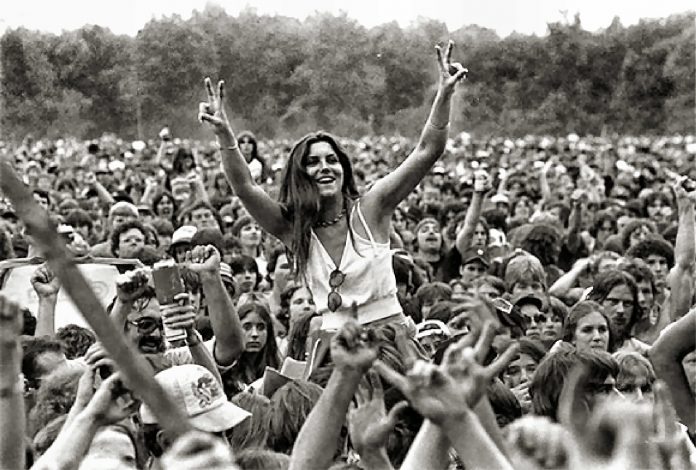 Forty-nine years ago, on Aug. 15, “An Aquarian Exposition: 3 Days of Peace & Music,” opened on a farm in upstate New York.
Before it ended some 400,000, of the over 1 million who today claim to have attended, sat in the rain and the mud while the Woodstock Music & Art Fair put on a concert for the ages.
I wasn’t there.
I was over 1,200 miles south in Avon Park, Florida.
That is where I remember the 60s.
Over the years, talking with folks who came of age during that decade, I have concluded that out in the great American heartland and especially in the southern part of it, the 60s that culminated in Woodstock hardly happened at all.
Avon Park, I think, was pretty typical.
About 75 miles south of Orlando.
Think Grove Hill, Alabama, my home town, with palm trees.
When I arrived there in 1966, the term “hippy” was just coming into fashion.
I moved to Avon Park to help open one of those junior colleges that were sprouting up like weeds all over Florida (and Georgia and Alabama); opened to educate baby boomers who for one reason or another could not attend a state university.
Junior colleges also provided a safe haven for those who did not want to go to Vietnam, though I recall no one objecting to our involvement there. In the community, more folks seemed concerned about the communists in Cuba than what was going on in Southeast Asia.
The only campus protest I remember was a humble petition from the students to the president asking that they be allowed to wear shorts to class. He promised they could after the new campus opened, but as long as the college was housed in temporary quarters downtown he wanted students to dress modestly. The fact that more than a few of the girls were wearing miniskirts shorter than shorts did not seem to trouble him.
Besides, they wore bras. That feminist anti-fashion did not arrive there until later in the decade when a young lady who had dropped out of the state university arrived to become our little college’s first “hippy.” She told me of how she had been involved with a radical student group at the bigger school and showed me underground newspapers sent by friends who remained behind. Soon she was gone, back I suppose to a campus where they did things like that.
As for the faculty, the closest we had to counter-culture was an expatriate from Broadway who moved down to help another expatriate operate guest cottages by a lake and teach music in the high school. When the junior college opened he did what high school teachers with master’s degrees did all over the state – he became a “professor.”
About the only way you would know it was the ‘60s, unless you checked a calendar, was what kids wore and how they wore it. Bell bottoms, fringed vests, and such could be purchased at the local dry goods store, along with traditional shirts and jeans. The guys’ hair was getting longer, but I can only recall one or two who might have inspired the billboard that appeared on the highway outside of town with a picture of a hippy and the admonishment “Keep America Beautiful, Get a Haircut.”
As for drugs, sex, and rock ‘n roll, I was told there were drugs to be had, but beer seemed to be the choice of my students, if they chose at all.
I am certain there was sex, just as there had been in the 50s and would be into the 70s and beyond.
As for rock ‘n roll, they listened to what other kids listened to. A few went to rock concerts held around the state – mini-Woodstocks – but if I had to make a call, I’d say that more listened to Glen Campbell than the Grateful Dead.
And if I had to make another call, I’d have to say this was the experience of most Southerners who came of age in the 60s.
I heard about Woodstock the way my students did – the evening news. And like my students, I followed it from broadcast to broadcast. As events on the farm were reported, Dick Cavett — whose late-night TV talk show was popular with folks who wanted to be a little iconoclastic, just not much – brought in some performers who had been there to tell the world what it was like. I did not get the urge to pack up and go.
In a sense, Cavett may have best summed up the ‘60s for most of us who lived through it with his response when someone asked him why he wore long sideburns.
“It’s a form of mild protest,” he said. “Sort of like boiling my draft card.”
That’s the 60s I remember.
Harvey H. (“Hardy”) Jackson is Professor Emeritus of History at Jacksonville State University. He can be reached at hjackson@cableone.net.