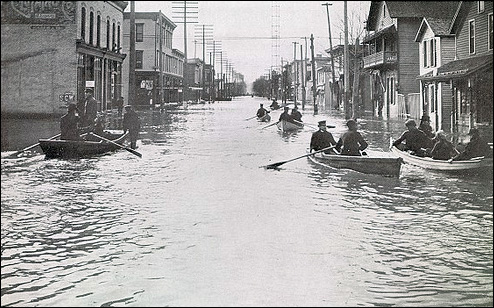 In some parts of the state it has been a wet summer.
Dry streams ran wet, creeks and rivers rose, lakes filled, and though dams were able to release water and control the level of the lakes they impounded, that water had to go somewhere, and that somewhere was downstream.
All this reminded me of the words of “Uncle Bud” Ryland, a Coosa River fisherman back in the 1930s who told an interviewer that “the ‘durned river’s like a man. Hit’s got t’ blow off steam sometimes.”
Today, with our system of hydroelectric and flood control dams, our rivers are less likely to “blow off steam” the way they once did, but back in February of 1961, fewer than half of the Coosa, Tallapoosa and Alabama river dams had been built. Back then when the rains came there was not much the people could do but head for high ground.
It all began, according to Mrs. Viola Goode Liddell, a Wilcox County schoolteacher and author of some note, when “a cold front collided with a warm front from the Gulf” and “one deluge after another descended on Alabama and North Georgia.” The Coosa and Tallapoosa rose rapidly and warnings went out to farmers to get their animals to safety. At the few dams that there were, engineers struggled to harness the flow, but the lakes could only hold so much and the rest had to be released.
Black Belt folks were fearful. The Alabama River, which had no dams, was lined with bluffs on one side and flood plains on the other. Folks who farmed the flats were all to familiar with what happened when the Coosa and Tallapoosa sent floodwater south.
Across from Montgomery the Alabama River rose to cover the fields. A few days later citizens of Selma stood safely on their bluff and watched the brown water churn over the strip of highway, south of the Edmund Pettis Bridge, where in a few years the drama of Bloody Sunday would be played out. Meanwhile, further downstream river residents waited, fearing the worst.
Then the weather broke, cleared, turned warmer, almost spring-like.
On Sunday, March 5, residents of Camden gathered in their respective churches to give thanks for their “special blessings.” But before the service was over a local farmer began going church to church and telling the men to come outside. When they were gathered he told them that the radio had reported that the Coosa dams could not hold back the tide and that more water was being released. There was no time to lose.
All along the river people in low-lying areas scrambled for safety. In a region where the Civil Rights struggle had divided the races as never before and where the national news found some of its best (or worst) examples of racism, residents spoke with pride of “white men bringing out Negro children and old folks in their arms, helping mothers and their babies into and out of boats, the returning for a load of trussed-up hogs and goats, chickens (if they could be caught) and even squally cats tied up in gunny sacks.” It was, one observer noted, “an epic to warm the hearts of the most cynical.” Another local, stung by what he thought was unfair treatment by the national media, was heard to remark “what a pity that (NBC newscasters) Huntley and Brinkley couldn’t have their cameras here now.”
For 28 days the waters stayed at flood stage all along the rivers. Homes and businesses were ruined; livestock drowned; roads were washed out; and when the rivers finally receded fields were left covered with sand and river muck.
Some residents tried to look on the bright side and told farmers they should be happy for the rich sediment deposited in their fields. Virginus Jones of Wilcox County would have none of it. “Man,” he told the smiling optimist, “if I were able, I’d make you eat every damn grain of the beautiful stuff.”
In time river folk recovered, but among old-timers the great flood of ’61 is still one of the region’s “reference points,” a “do you remember when” spot on the historical calendar.
Floods today won’t be as bad. Since 1961, seven more flood control/hydroelectric dams have been built.
Still, we cannot control Mother Nature. We can only bend her a bit to our will.
And hope for the best.
Harvey H. (“Hardy”) Jackson is Professor Emeritus of history at Jacksonville State and is the author of Rivers of History: Coosa, Tallapoosa, Cahaba, and Alabama Rivers published by the University of Alabama Press. He can be reached at hjackson@cableone.net.