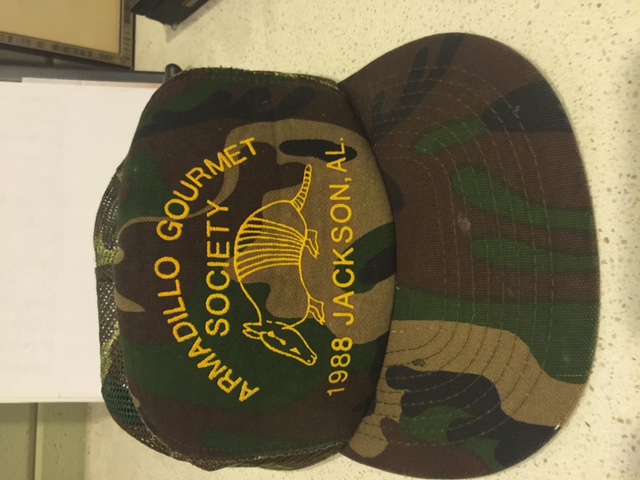 I am not a hunter.
I used to be, but not anymore.
But I am an eater, and when I think of eating what hunters bring in, I always think of the Armadillo Gourmet Society, a south Alabama institution that, for a brief time, combined wild game and illegal beer to raise money for a good cause.
Let me explain.
Back in the 1970s (according to my unnamed but thoroughly reliable source) a bunch of South Alabama hunters began meeting for breakfast. The group was bound together by their belief in the strict enforcement of conservation laws (anyone caught night-hunting should be publically hanged in front of the court house) and their disdain for local liquor laws.
As is the case in most small towns, the breakfast bunch soon found itself the subject of reproach among the tongue-clickers in community; and so to show their critics “what a fine group of gentlemen they were,” they decided to sponsor a wild game supper, the proceeds from which would go to the Sheriff’s Boys Ranch.
Calling themselves the Armadillo Gourmet Society, they immediately created a buzz by announcing that only 250 tickets would be sold ($20 apiece), and only men would be allowed to attend.
Society members cooked and donated their various specialties – deer hash, dear steak, deer sausage, fried squirrel and squirrel dumplings, possum and sweet potatoes, coon, duck gumbo, fried catfish, grilled bass, bass gumbo, fried rabbit, wild hog cooked in the ground, the list went on and on to include, naturally, armadillo.
Wives and female friends contributed cakes and pies. One woman, the spouse of a member, was invited to attend because she could bake a cake in the shape of one of various animals. However, this nod to diversity was about as far as the group would go.
There was also fried rattlesnake and beer.
I’ll get to the rattlesnake in a minute.
First the beer.
Keep this in mind. The county in which this event was held was “dry.” Liquor could not be legally sold or bought within its borders.
Yet there was beer for $1 a can.
Some folks said it was a love-offering, and if you loved beer maybe it was. But let’s not split hairs here. It was sold and selling was against the law.
However, in this case it was the “law” that provided the beverage.
Yessir, according to my late father, who was a regular attendee (along with many other politicians), the beer came from what was collected when the Sheriff’s department caught a bootlegger and confiscated his stock.
Dry county, remember.
After the bootlegger was convicted and sentenced, rather than pour out the evidence, as had been the custom, it was held back and donated to the Armadillo Gourmet Society to raise money for the Boy Ranch the state Sheriffs’ Association sponsored.
(Those involved easily accepted the logic of this. The few who expressed some sort of ethical, moral, or legal reservations were politely ignored.)
And in the room where they sold the beer was a big pan of fried rattlesnake – an appetizer. Tasted like fishy-chicken. Or gator.
I know, because I had the pleasure of attending a couple of times with Daddy, and I have the souvenir hats to prove it.
The gathering quickly become a major social event. Presided over by the local state representative (who was also speaker of the Alabama House of Representatives), it attracted all manner of folk. Once, I am told, an Alabama governor who was also a Primitive Baptist preacher, came as a guest. Naturally, he was carefully escorted about because there were things they did not want him to see.
Like gambling.
Which was also illegal but when you have surrendered the high ground on liquor why not descend on down into the depths of depravity and have yourself a really good time.
In a back room, away from the tables full of food, away from the beer and the rattlesnake, you could have your choice (according to my sources) of either high stakes poker or an equally high stakes crap game.
I cannot personally vouch for either, but given what else was going on, why not?
And so it was that for a number of years the Armadillo Gourmet Society met, ate, drank, gambled, and raised money to help the underprivileged.
Then it ended.
Reasons for its demise differ.
Some say it was a fight at the crap game.
Others claim changes in the court house and the legislature brought in office holders whose constituency was less tolerant of such things.
Or maybe the old group just wore out.
But whatever happened, for a short while the Armadillo Gourmet Society stood tall as an example of how things are done in Dixie. And if you have a problem with it, well, it’s your problem, so keep it to yourself.
Harvey H. (“Hardy”) Jackson is Professor Emeritus of History at Jacksonville State University. He can be reached at hjackson@cableone.net.