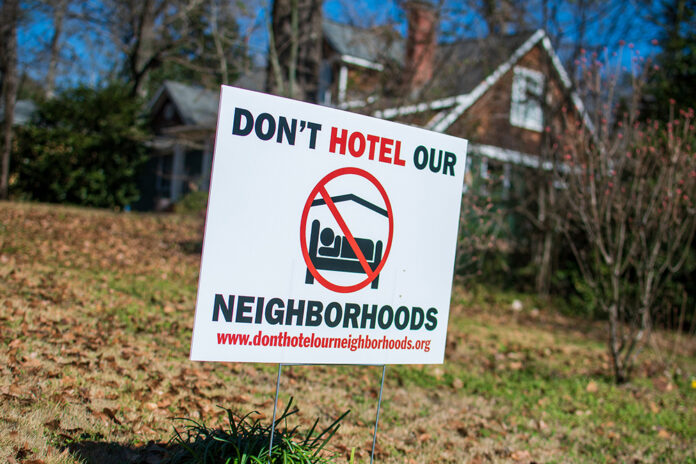 Additionally, language had been left out of the prior draft, which specified that homestays do not have to comply with “the maximum floor area of a dwelling unit allowance where a home occupation might operate.” There is also clarification on parking.

This was a second reading of the ordinance, since Ward 4 Council Member Brett Smith denied unanimous consent at the June 15 council meeting.

For more information on the short-term rental conversation and ordinance, see the following stories:

There were several Auburn residents, and one from Opelika, who attended the meeting to voice opposition to the short-term rental ordinance as a whole, not just the language added Tuesday.

“I’ve told y’all how I feel about this ordinance many, many times,” said resident Susan Bolt. “But tonight, I’m asking you to back up and reverse what you’re doing and not go forward with the changes and amendments that you’re proposing tonight. The creation of the definitions that y’all are looking at tonight trample on people’s rights.”

However, the ordinance as a whole was not up for debate, only the changes.

“The meat of the ordinance and what it means stays the same,” said City Manager Megan Crouch. “It is clarifying a few things that could be confusing in the zoning ordinance and it’s making sure that they track as they were intended to track. There isn’t any major change you’re making tonight.”

Therefore, most citizens spoke during citizens’ communications at the end of the meeting.

Several asked the council to revoke the ordinance as a whole.

The changes passed on a vote of 8-1. Smith voted against the ordinance.

He said that while his questions regarding the ordinance were answered by city staff over the last two weeks, he could not discuss his concerns with the ordinance given the pending litigation on the matter.

For more on the lawsuit filed by Ward 5 Council Member Steven Dixon regarding short-term rentals, see B7.

The city council amended the city code Tuesday night to allow for parking fees in the Wright Street Parking Deck.

“More downtown parking has long been a priority of Auburn residents as identified in the citizen survey and citizen input over the years,” said information from the city’s e-packet. “Changes to provide more parking over the years have included the move to downtown parking kiosks, the creation of the Gay Street parking lot (once occupied in part by the AuburnBank drive-through), transitioning the ground floor of the Gay Street parking deck from leased to metered and changes to parking times and rates to encourage parking turnover.”

The resolution the council passed specifies that to park in the new deck, residents will pay $1 an hour up to $15 over 24 hours.

The rates are subject to change by the City Manager on event days, such as game days, the e-packet said.

The new deck will not change the parking rules that already exist downtown, including the two-hour time limit in spaces in front of buildings.

“The ordinance also repeals language enabling valet parking in the Gay Street parking deck and the downtown employee parking lot which AuburnBank provided space for prior to their current parking deck and site construction projects,” the e-packet said. “Finally, the ordinance adds provisions for a forthcoming app to pay for downtown street parking, which will require a surcharge be added to the parking fee. At launch, that surcharge will be $0.35 cents.”

To use the Wright Street deck, patrons will take a ticket when they enter the deck and then pay when they leave. The machines will take credit, debit and pre-paid cards. There is also the option to pay on a smartphone.

One of the stipulations for the new deck is that parking fees will be enforced 24/7, a change that prompted discussion among council members.

Crouch said there is concern that if they do not enforce parking on holidays and in the later hours of the day, people will park their cars and leave them there without penalty.

“The basic intent would be to have the same hours as the other city parking hours,” he said.

However, Ward 3 Council Member Beth Witten said that this would affect a lot of other aspects of the ordinance.

Griswold agreed with Witten and removed his amendment and said that the hours could be something the council looks at later.

“I would be happy to go ahead and approve this, evaluate it over time and we’ll come back and look at it once we have some more data,” he said.

Dixon added an amendment that specifies Juneteenth as a holiday in the city code, which was passed by the council.