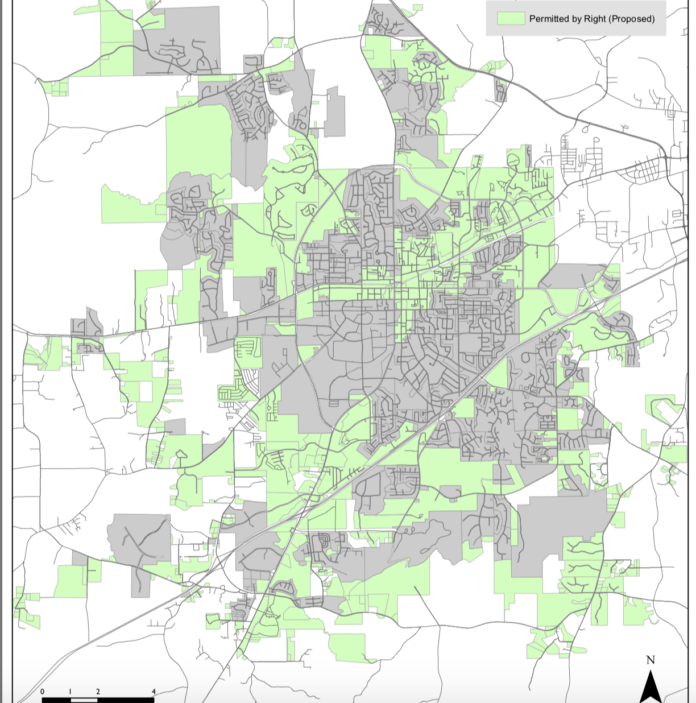 The Auburn City Council held a work session on Feb. 8 to discuss short-term rental policies for the city.

The council will take formal action on the considered policies on Tuesday night during the regular council meeting. You can watch the meeting here: https://www.auburnalabama.org/coronavirus/meeting-updates/.

Soon after Mayor Ron Anders was elected in October 2018, he formed the short-term rental task force.

Robison shared definitions with the council for the two recommended types of short-term rentals.

A homestay is, “A home occupation in which an individual who owns a dwelling unit and uses it as his or her permanent residence hires out such dwelling, or any portion thereof, as lodging.”

The planning commission has recommended Homestays and Short-Term Rentals in the following zones:

The planning commission also recommended that regulations on Homestays include that:

The planning commission also recommended that regulations on short-term non-primary include that:

Anders asked first how the new regulations could be enforced within the city.

City Manager Megan Crouch said that she has provided information in the past about an online platform that monitors short-term rental activity.

“Say we have about 300 active, short-term rentals in the city that are actively listed right now, the first phase rollout would be, we would contact everybody in that database, based on what the council decides and say, ‘Hey, you either need to get a license or you need to cease and desist your short-term rentals because you’re in an area that it’s not allowed,’” Crouch said.

“From there, there’s gotta be a little bit of a period, I know there’s been a lot of public sentiment about no grace period, but you can’t pass an ordinance on a Tuesday and us be out enforcing on a Wednesday. We’ve got legal-advertising requirements, but we also need to give people the opportunity to either stop doing what they’re doing if they’re not supposed to be doing it or to get licensed.”

Crouch said there will be an available phone number that residents can call to discuss complaints related to short-term rentals.

Crouch said that the basis revolves around single-family homes and protecting those.

“My big thing is I have a hard time telling anybody what they can do and can’t do with their homestead in any neighborhood, but at the same time it’s horrible for a resident who’s been in a neighborhood for 50 years, and some of them have, some of them have contacted me and all of a sudden, they’re elderly and they go out in their front yard and people are urinating and throwing trash,” said Ward 8 Council Member Tommy Dawson.

Ward 3 Council Member asked Crouch if a cap could be placed on the amount of shorter-term rentals allowed in each zone.

Crouch said that first, legal counsel would need to be sought and secondly, asked how the rentals would be awarded.

Ward 1 Council Member Kelley Griswold asked why guests were limited to six for homestays, and Crouch responded that the planning commission had ultimately decided that that may need to be removed anyway.

Smith asked how sublets factor into the equation and whether they would be considered as short-term rentals.

Crouch said that if a sublet is being used as a way around the short-term rental regulations, then the city will need to consider that.

Dawson asked if the council could hold a special meeting for the citizens to voice concerns or support. It would help if the meeting could be held on a different night than the vote, he said.

Crouch said that since there is already a public hearing set for Tuesday, that needs to be upheld, although the vote can be postponed after the hearing.