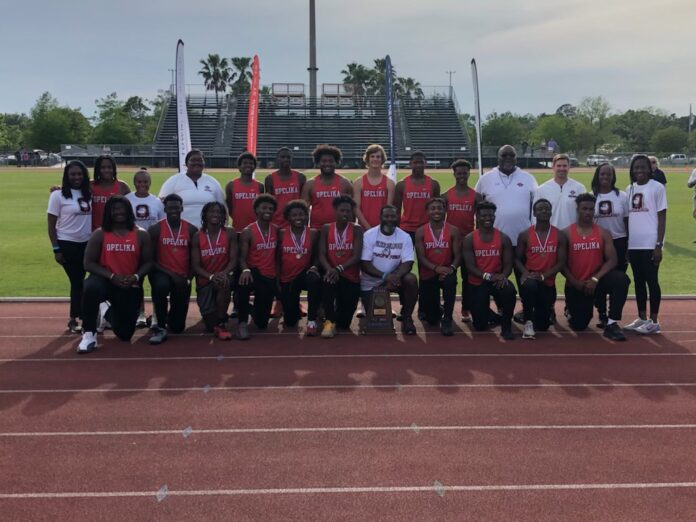 The Opelika High boys and girls track and field teams travelled to Gulf Shores for the 2021 Outdoor State Meet this past Thursday through Saturday.

Opelika’s boys team dominated the three-day meet, winning the championship as they racked up 114.50 points, 71.5 points ahead of second place Scottsboro. The win capped what has been a dominant year for the boys team which won the Indoor State Championships last fall.

Junior Jarell Stinson was standout performer for the boys team. Stinson finished first in the 100 meter, 200 meter and 400 meter dash. Senior Eric Watts and LeDamian Rowell were the other two dogs to finish in first place, winning the long jump and triple jump, respectively. Watts also came in fifth in the 110 meter hurdles and second in the 300 meter hurdles. Rowell came in second in the long jump, while the two tied each other for third in the high jump. Other dogs who finished within the top-5 in their respective events were senior Justin Shorter, second in the 110 meter hurdles, and senior Trevon Moore, fourth in shot put.

“I am so happy for our kids,” Johnson said. “All of our assistant coaches attended OHS and understand the successful history. All of the student-athletes represented themselves and Opelika with class. I had two college coaches walk up to me saying they were going to offer scholarship’s to our team members. That is my reward, seeing them mature, get an education and contribute to society.”

The Lady Bulldogs finished ninth with 10 points, but had some strong individual performances over the weekend. Trinity Love won the discus to finish as the only girl state champion and placed third in shot put. Senior Priscilla Perry was third in discus. junior Haley Sanders finished seventh in the 100 meter dash. Junior Brekin Gould placed 18th, 10th and eighth in the 800 meter, 1600 meter and 3200 meter run, respectively. Sophomore Cherdi Daniels and Perry placed sixth and 14th, respectively, in shot put.

Opelika started spring practice on Monday. Head coach Erik Speakman will hold practice through May 6 and with a scrimmage 6 p.m.  Friday at Bulldog Stadium. The dogs have several positions up for grabs after graduating many starters.

The Bulldogs have over 100 student-athletes participating in spring drills.

AHSAA CENTRAL BOARD OF CONTROL

The Alabama High School Athletic Association voted on officers during last week’s meeting. Opelika’s Dr. Farrell Seymore was voted vice president for a two-year term. The Central Board of Control is the governing body over the AHSAA.

D. Mark Mitchell is the Sports Director at iHeart Media, host of ‘On the Mark’ on Fox Sports The Game 910-1310, Co-Chair of the Auburn-Opelika Sports Council, Chairman of the Super 7 and Dxie Boys Baseball State Director.