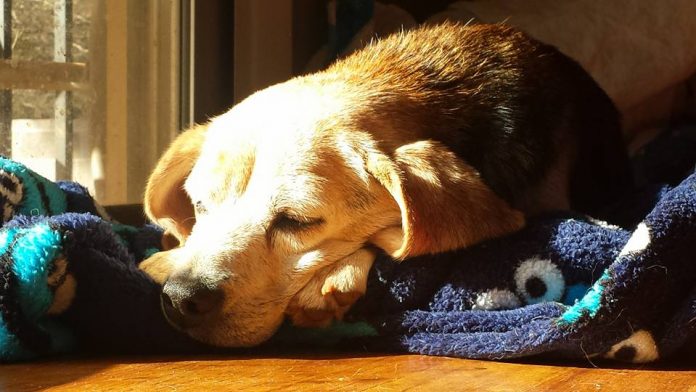 Reading this I paused to reflect on dogs I have known and loved.

Now I’m not opposed to cats. They are OK. But, well, it’s like when this cat took up at my house and I tried to give it to my buddy Brad.

Brad: “Who wants a pet that doesn’t care if you’re there or not”?

I kept the cat.

Dogs care. They are always glad to see you. And of the dogs I have owned, Beagles were among the gladdest.

I got my first beagles when I was about 12 years old. A pair. Got them on George Washington’s birthday, so I named them George and Martha. Naturally.

Those beagles led to more beagles and in time I was the go-to guy if you wanted a small dog for rabbit hunting.

But I grew older and in the process of putting away childish things I also got out of the Beagle business.

Still, I never gave up my love of the breed.

Years passed and I had other dogs. Then I went dogless, until my children, then 9 and 4, began lobbying.

With all the usual promises.

All the usual lies.

I held them off with cost. We’d have to hire someone to take care of it when we were away. We’d have to fence the yard. Get a dog house. Have it spayed. I hemmed and hawed and delayed and made excuses.

And they enlisted Mama. Mama.

If you are married and have children then I don’t have to tell you that when Mama sides with the kids you are done for.

And if you are not married or are but don’t have children, read on and learn. At moments like this all you can hope for is a few concessions to save at least a shred of dignity.

Pater Familias my foot. So I said, “OK, but it will be an outdoor dog.”

And my wife said “they.”

And she, “We have two children.”

I could see the logic, but more than that, I could see the inevitability. There was no way to argue that we had fewer children than we had, for there they were, eyes pleading for puppies.

And having two, there was no way to argue that they should share a dog, because I knew that despite all my efforts (and their Mama’s) sharing was not something they did on a regular basis.

So I reluctantly agreed,

They would have to be Beagles.

Now I did not know of anyone around here that raised Beagles. But assuming that my wife could find someone, at least I would have dogs I wouldn’t mind taking care of, since I was pretty sure that is what I would be doing – sooner or later.

And I left the ball in their court.

“When you find them, let me know.”

Which my lovely wife took as a challenge.  And so it came to pass that in the weeks that followed she scoured the classified ads, looking for what I hoped wasn’t there.

Until the day she came in and showed it to me.

“Free to a good home.” (The price was right.)  “Part-beagle and part Walker Hound.”

Now my sweetheart, bless her, grew up in the Atlanta suburbs. She knew about as much about Walker Hounds as I knew about shoe sales at Macy’s. So I gently asked, “Have you ever seen a Walker Hound?”

“No,” she admitted, “but they can’t be very big if they can mate with a Beagle.”

And once again I was caught in the web of wifely logic from which there was no escape.

And a few days later we were on the way to see the puppies. And of course the children loved them. Who doesn’t love puppies. Small, warm tummies, little ears and big feet.

Big Feet! I feared for the future.

And in the months and years that followed the puppies – named Freckles and Sprinkles – grew. As they did “free to a good home” cost me a chain-link fence, spaying (both were girls), increasingly large bags of dog food, vet bills, and dog sitters.

They also grew in ways I never imagined. Sprinkles became a sleek Walker Hound with a voice to match.

Not a hint of beagle in her. And dumb as a brick (“challenged” according to my wife).

Meanwhile Freckles evolved into a black and white sausage on toothpick legs. An eating machine. But I love them. For they are glad to see me when I come home.