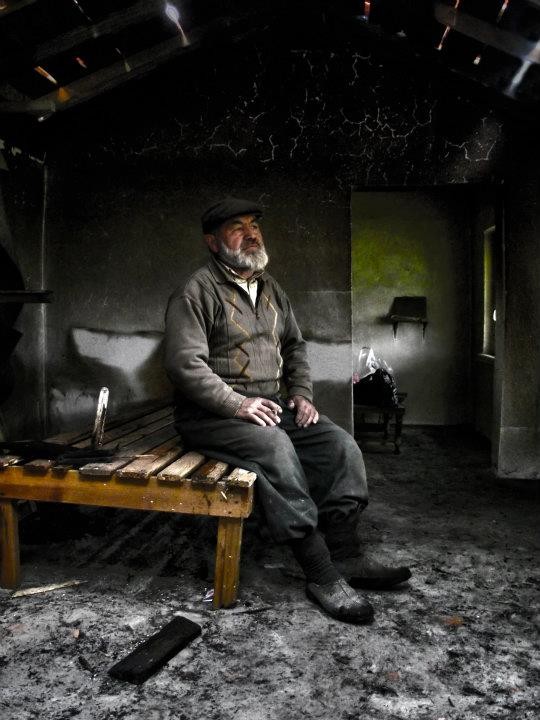 There’s a long line waiting to get into the breakfast joint. And I see him, sitting on a bench outside. He’s old, and I have a soft spot for old men.

He’s wearing a windbreaker with holes in it and ratty tennis shoes. He’s reading a book—an illustration of a cowboy on the cover.

Many upstanding men have passed the hours with the venerable Louis L’Amour.

His legs are crossed, he’s flipping pages. I sit beside him. He’s easy to converse with. Men who like dime-novel Westerns usually are.

He speaks nice and slow.

He’s in town visiting his son. Only, no visiting has happened yet.

Busy. I don’t like that word. Especially when it comes out of my own mouth.

The man’s wife passed two years ago. It was sudden. And even though he doesn’t say, I’ll bet he’s not used to the absence yet. Just eating right can be a daily battle for the man whose wife spoiled him.

Because this year, he’s making some changes. He’s been taking road trips. Mostly, to visit childhood friends and high-school pals. He’s had a famous time doing it. He’s been all over the Southeast.

She wouldn’t have wanted him to wallow.

He nods toward his horse in the parking lot. Every man’s dream truck. A ‘89 Ford 7.3 liter, diesel. Red. Cherry condition.

One day, if I play my cards right, maybe I’ll grow up to become this old man.

“Been driving that thing all over,” he says. “I’ll keep her until she tells me she’s had enough.”

He called his son and scheduled breakfast with the grandkids yesterday. It didn’t work out. So they rescheduled today. But it’s not looking good.

The man checks his watch. They are running forty minutes behind. So, he waits. And he reads.

“They’ll be here,” the man says, reminding either me or himself. “Probably just stuck in traffic.”

I shake his hand and wish him luck. I tell him not to strain his eyes too much with that book.

He smiles and says, “Too late.”

Inside, I order eggs, bacon, and coffee so strong you can use it to power residential lawn mowers. And I think about all the lonely old men of the world.

While the waitress warms up my mug, I see the old guy through the front window. He’s probably reading about Jubal Sackett’s desperate and heated gunfight at the Last Chance Saloon.

Then, the man digs for a phone in his pocket. It’s a flip phone. I see him dial. He listens. I wonder who he’s calling. His mouth never moves.

He hangs up. Finally, he stands. He tucks the book into his coat and walks away. His taillights leave the parking lot. That truck of his is a beauty.

I’m no judge. And God knows, I get busy just like anyone else.

But I hope that man’s son realizes what a good breakfast he missed today.