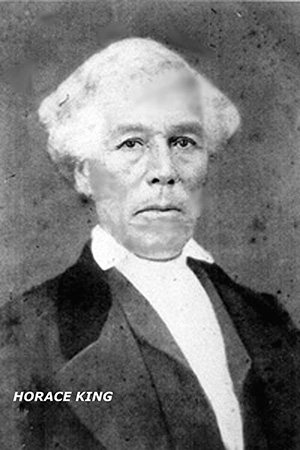 By Ann Cipperly
For the Opelika Observer

Born a slave in 1807, Horace King became one of the most successful engineers and architects in east Alabama and across the South, constructing bridges and buildings, including the house at Spring Villa. Today, King’s extraordinary talent is showcased in the freestanding, three-story spiral staircase at the State Capitol in Montgomery.

Horace grew up on the King Plantation, his master’s home, in Cheraw, South Carolina. His mother, Susan, was the daughter of a black female slave and a full-blooded Catawba Indian, while his father, Edmund, was a half-breed Indian.

When their master died in 1829, the family was sold to John Godwin, who was establishing himself in construction and bridge building. An enterprising young businessman, Godwin saw opportunities as new lands were opening on the shores of the Chattahoochee River.

By 1832, Columbus was a growing town, and Girard (now Phenix City) had just been settled. The only means of crossing the swift waters of the Chattahoochee was by ferry.

When news reached Godwin of plans to build a bridge across the Chattahoochee, he quickly submitted a bid of $14,000 to build a Town lattice truss bridge. After the bid was accepted in March 1832, Godwin and King moved to Girard and began working on the bridge in May.

In his 20s, King supervised the construction of the Dillingham Bridge, the first bridge to span the Chattahoochee. When the 900-foot covered bridge was completed in early 1833, Godwin and King were established as expert bridge builders.

With King’s superior skills and master workmanship, Godwin made bids on other contracts to build bridges and public buildings. In 1838, they constructed the covered bridge spanning the Chattahoochee at West Point and also the one at Irwinton (Eufaula), which was over 800 feet in length.

When the Harrison Freshet flood occurred in 1841, the Dillingham Bridge was washed downriver and rested in cotton fields.

Records reveal Godwin’s bid of $2,000 to rebuild was above the lowest bid. The city council awarded the bid to Godwin because of his timetable for finishing the bridge. King rebuilt the bridge in five months.

Over the years, a bond developed between King and Godwin. King was respected as a partner and friend, not a slave.

In 1839, King married Frances Thomas, whose mother was a free black woman. Frances was also of black, Indian and Caucasian ancestry. They had four sons and one daughter, who were educated at home by private tutors. When his sons were older, they worked with their father at the construction sites.

Not only did King supervise the construction projects and make innovative changes in designs himself, he worked well with people whether they were also slaves or free.

As King’s reputation spread, he impressed businessmen throughout the South. In the early 1840s, State Senator Robert Jemison Jr. of Tuscaloosa, who owned several businesses, joined Godwin and King on several projects.

While King’s success continued, Godwin had suffered major setbacks financially by investing in the Girard-Mobile Railroad, and his health was failing.

Godwin feared King could be taken and sold to settle his debts. He petitioned for King’s freedom with the help of Jemison. The Alabama General Assembly released King from slavery Feb. 3, 1846, and he became a free man.

King’s success grew as he built the bridge across the Flint River at Albany, Georgia. Bridges were also built in Georgia, Mississippi and South Carolina.

After the State Capitol in Montgomery burned in 1849, King worked on rebuilding the structure. He built the impressive spiral staircase.

Among other projects, he supervised the construction of the Alabama Insane Hospital in Tuscaloosa, which was one of the most extensive building projects before the Civil War.

In 1850, King also built the house at Spring Villa for Godwin’s daughter, Mary, and her husband, William Penn Yonge. The house with its long span was King’s specialty.

Records show that King also built the first courthouse and jail in Opelika.

When Godwin died in 1859, King provided for his family. To express his friendship with Godwin, King purchased a marble shaft for $1,000, erecting it over his grave. The inscription on the monument reads, “This stone was placed here by Horace King, in lasting remembrance of the love and gratitude he felt for his lost friend and former master.”

Perhaps the only slave who honored his former master, King’s act of admiration is recorded in Ripley’s Believe It or Not!

The Civil War years were difficult for King. His wife died in 1864.

King was hired and paid in Confederate money to build a rolling mill. He supplied the Confederacy with logs, oak beams, wooden pegs and lumber for the construction of the ironclad gunboat Jackson. King and two of his sons also worked on the construction.

When Union troops were passing through Girard near the end of the war, they took two of King’s best mules. King received his mules back, with apologies, after he proved to them he was a Mason.

After the war, King and his sons formed the King Brothers Bridge Company. Much of their business in the early years was rebuilding bridges and factories destroyed by Wilson’s raiders at the end of the war.

He is credited with building nine bridges across the Chattahoochee River, four at LaGrange, Georgia, four in Alabama, nine or more in Mississippi and one in South Carolina.

King was highly regarded in his business and personal life. Although he protested, King was elected to represent Russell County in the State Legislature in 1867. King was one of the managers of the election at Girard. He urged everyone who presented a ticket with his name on it to “scratch it off.” He won anyway.

When he failed to attend the first session due to work, friends urged him to attend. King fulfilled his duty. He was reelected without campaigning, serving until 1872.

King introduced several bills in the legislature. One bill provided for the relief of laborers and mechanics. Another required convicts sentenced to hard labor to work on public highways.

In the 1870s, the King family moved from Russell County to LaGrange. His company built several buildings there.

In his retiring years, the former slave enjoyed life in LaGrange raising and riding horses. King died May 27, 1885.

Although all of the major bridges he built are gone, history remembers him as a superior bridge builder and one of the most outstanding engineers in the South.

In 1989, the University of Alabama named King to the Alabama Engineers Hall of Fame.

When the Rev. Francis L. Cherry wrote of King, he remembered him with words such as “honor,” “integrity,” “superior capacity,” “intelligence” and “unimpeachable trustworthiness.”

Overcoming many barriers, King broke free of bondage to triumph in success and became a person admired and respected by all races and classes.