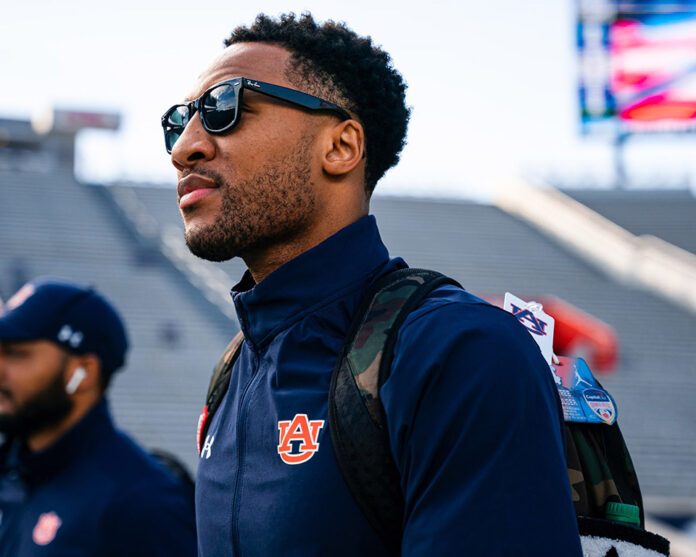 Recruiting is perhaps the biggest difference-maker in collegiate athletics. It is vital to the success of any program. Putting together a staff full of effective recruiters is often a head coach’s first priority when taking over a program.

Ty Holder, who is in his second year on staff with the Auburn Tigers Football Program, is a former cornerback for Ball State who played professionally in the Alliance of American Football and the XFL. Prior to his arrival on the Plains in February 2022, Holder served as a defensive graduate assistant for the North Carolina Tar Heels.

Holder played a big role in landing crucial prospects in a recruiting class that is expected to help Auburn find its footing once again.

“Tyler Scott or Bryan Battie,” Holder said when asked about the recruits he is most excited about. “Those are guys who I got to learn about and got to know their families, so I’m excited to see what they do when they come to Auburn.”

The hiring of head coach Hugh Freeze has resulted in a substantial morale boost for the entire Auburn football program, and the effects of it have been noticed when it comes to recruiting. Holder stressed how much he has enjoyed being on Freeze’s staff so far.

“It’s really like a dream come true,” Holder said. “I got to see him from the outside as a great SEC coach, and now I get to learn from him every day.”

Throughout the recruiting process, Holder said he prioritizes building a relationship with prospects.

“I think it’s important to establish a connection with a person and let them know you care, especially parents,” Holder said. “I like to let parents know that I’ll recruit their son the same way I would want my son to be recruited.”

Former Auburn and NFL cornerback Trovon Reed has been a big part of Auburn’s recruiting staff since his return to the Plains in 2021. Reed has developed a reputation as an effective recruiter due to his ability to relate to people. Holder said he has thoroughly enjoyed getting to work alongside a guy who is known as one of the best recruiters in college football.

“T-Reed, that’s my guy,” Holder said. “He’s probably the closest person to me on the staff. I get to lean on him and see how he recruits. It doesn’t matter if it’s the janitor or the head coach, he is such a people person with everybody.”

It is no secret that the Southeastern region of the country is one of the hardest places to recruit due to the abundance of great coaches and successful programs. It is vital to stand out to find success.

“I’m one of one,” Holder said on what sets him apart. “Just me being myself, I can set myself apart from other coaches. A recruit and their parents know if you’re being authentic or if you aren’t. I like to establish genuine relationships.”

While the inability to recruit has been the downfall of many coaches, Holder said he enjoys the process and sees it as rewarding.

“I love the fact that you get to establish a relationship with the recruit and their parents,” Holder said. “If you get them to sign with Auburn, there is no feeling like it. I get to mentor and inspire these guys. The whole reason I got into college football is to mentor young men.”

Auburn’s fanbase has developed a reputation as one of the best in all of college athletics, and Holder said he agrees.

“Auburn is truly a great place,” Holder said. “I’ve never been around a better gameday environment. The fans will support you to a T. I never want to leave.”

The Auburn football program is looking to get back on track and reclaim its place as an annual contender in the SEC. Holder being on staff will only expedite that process.