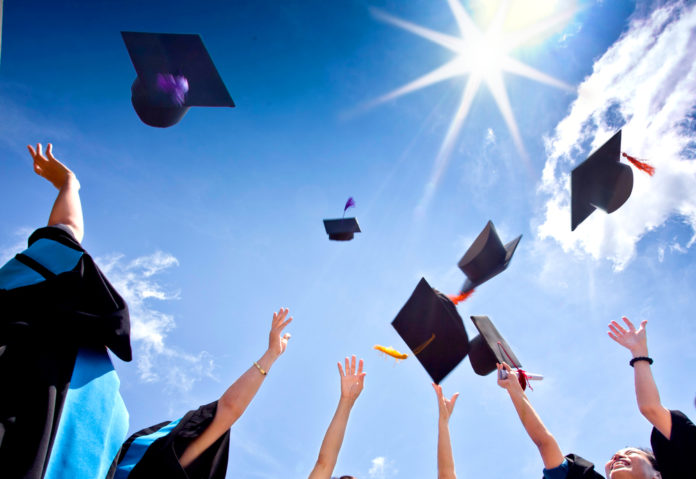 I have attended a lot of graduations – my share and somebody else’s.
Kindergarten (three times), elementary school (three times), high school (four or five times), college (Lord knows how many).  They all had a lot of things in common.
Proud graduates.
Proud families of graduates.
Longwinded speakers.
Except when former state senator Doug Ghee or yours truly were on the podium.
I am not sure which of us holds the record, but when we both took a turn speaking at a JSU graduation both of us came in at under 10 min.
More than once I have been praised for brevity.
“They gave him twenty minutes
And he finished up in ten.
Now there’s a sterling speaker
And a prince among men.”
Though no one recalls what I said.
“His diction wasn’t such-a-much.
He hemmed and hawed a bit.
Some say he spoke a lot of sense.
But best of all, he quit.”
This year I am getting a triple dose, graduation wise.
My son, the scion, graduated from Auburn in December.
His girlfriend just graduated from Huntingdon.
And now my youngest is graduating from high school.
Now it is always the prerogative of the elderly to reminiscence over how wonderful things were in the “good old days,” even when we know they weren’t, but in one regard graduations were better “back then” than they are today.
Decorum.
It seems to me that what was once a dignified ceremony is today punctuated with all sorts of raucous behavior.
Not from the graduates, who smile and wave when they get their diplomas, but otherwise remain the serious scholars that the ceremony certifies them to be.
OK, there was this one guy at one of our fine SEC universities who was shown on the internet downing blue jello shots while he waited for his name to be called.  You might think that was appropriate since blue is one of his school’s colors, but I think I’d draw the line before I got to that.
As for other things, like decorating their mortar boards, or wearing shorts under robes and funky shoes below, I write those off as part of their one last youthful fling before life sucks the fun out of them.
Graduates can and should get a little raucous.
Families should be more restrained.
Unfortunately, some aren’t.
In the half century that I have been attending graduations, I have seen and heard everything from air horns blown in celebration to airplanes pulling banners with the name of the graduate there for all to see – holding graduation inside cuts down on the banner flying, but indoors only magnifies the sound of the horn.  I have heard yelling not unlike that heard at a football game when your team scores, and I have heard coordinated family chants which delighted (or maybe embarrassed) the graduate.
I have even heard a protester loudly voice his opposition to having a minister pray at a state university function.
(Now I am all for the separation of church and state, but I am also for tradition.  More than that I am all for graduates getting all the spiritual support they can, so bring on the preachers.)
But back to my point.  It has been a big year for graduations, and in the future there will be others.
My baby girl, the high school graduate, is off to Samford University next year.
Samford, as you might know, is a Baptist college – not the biggest Baptist college in the state, that would be Auburn, but big time Baptist nonetheless.
And in four years I will be going to yet another graduation, one in which praying won’t be an issue.
Then I will find out if the friends and family who gather at Baptist Samford graduations are less demonstrative than those who congregate at similar ceremonies at state universities.
It is no secret that Baptists can get a little rowdy.
It is also no secret that Baptists can be as restrained and orderly a bunch as you would hope to find.
For my part, I plan to adopt a general wait-and-see attitude and hope for the best.
As for this year, congratulations to all the graduates and to their families.
May your future be bright.
May your successes be many.
And may your commencement speeches be short.
Ah, short commencement speeches.
Now that would be something to celebrate – loud and rowdy.
“And when the speaker stopped and sat,
We cheered and cheered again.
For they gave him twenty minutes,
And he finished up in ten.”
Then, when the tumult and the shouting dies, maybe, instead of filing out to “Pomp and Circumstance.” the newly degreed should leave to the lilting strains of “You can’t always get what you want” by the Rolling Stones.
“But if you try, sometime you find you get what you need.”
Now that would be a graduation to remember.
Harvey H. (“Hardy”) Jackson is Professor Emeritus of History at Jacksonville  State University, He can be reached at hjackson@cableone.net.