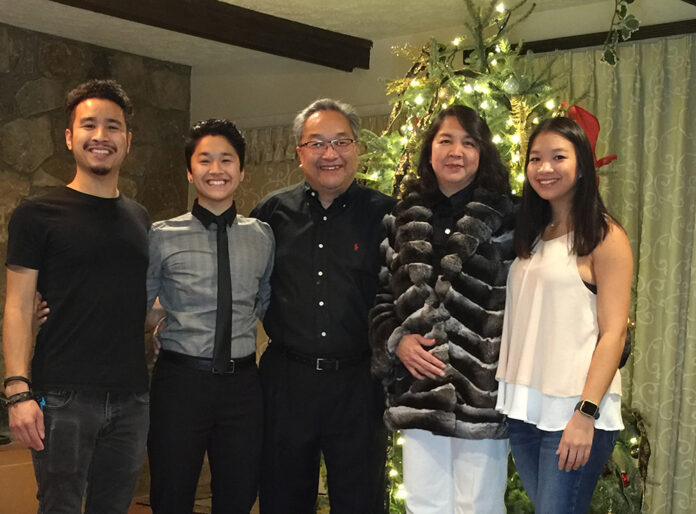 Almost all Auburn students, and their parents, know who Fred Kam is. Especially since the pandemic began and affected the lives of all Auburn residents.

Kam is the executive medical director of the Auburn Medical Clinic and he was busy enough before a global pandemic changed the course of his work.

Years before he was the face of Auburn medicine, Kam was a bit of a world traveler. He grew up in Trinidad and Tobago, attended high school in England and attended the University of Miami for his college degree and medical school.

Kam decided he wanted to study medicine when he was young. He suffered from a disease as child that left his parents wondering if he would even survive the ordeal.

“I was very ill, and actually, I think in retrospect, they thought I was maybe going to die,” Kam said. “A family doctor, a GP, made a house call. He was a friend of the family and he took care of me, gave me some shots, sat with my family for a couple hours — this was at night — and I made a remarkable recovery. And I just distinctly remember how I felt, and I distinctly remember how quickly I got better and what an amazing gift that he had to do that.”

Fast forward to when Kam was nine and his mother had a similar experience. She needed surgery and the same doctor performed the operation. There were complications that led to more surgeries and blood transfusions.

“The whole nine yards,” he said. “And I am an only child, and back in those days, children weren’t allowed to go into the hospital, especially a hospital run by Catholic nuns that was pretty strict. And so my dad sneaked me in and I remember sitting at the foot of the bed, looking at my mother, feeling totally helpless, totally helpless and thought to myself, ‘I never want to be in a situation like this again where I’m helpless.’”

These experiences set Kam on the path to his medical degree and eventual home in Auburn.

“That decision was made early and then I just worked toward it daily to get to where I became a doctor,” he said.

After finishing high school in England, Kam decided he needed a gap year before starting medical school, which, at the time, he also planned to attend in England.

Kam said his father didn’t want him to come home to Trinidad and Tobago for fear he would never finish his degree, so Kam settled on a gap year in Miami, Florida.

As he put it, “the rest is history.” Kam attended medical school in Miami after that.

His wife, Charlene, is also from Trinidad, he said, and neither wanted to raise their future family in Miami.

“We wanted an environment for our children to grow up in that was pretty safe, a fair amount of freedom and nice people, nice neighbors, all of those things and Auburn fit all those criteria,” he said.

Now, Kam and his family have been in Auburn for 24 years. Auburn was a lot smaller then than it is now.

“I remember when I had run it by my wife and I said, ‘I think you might like Auburn,’ and this is 1997 now. And she said, ‘Well, are there any good sushi restaurants?’ And I’m like ‘no, baby.’ Right, back then there was nothing. You couldn’t even get sushi in Kroger.”

Despite adjustments, Kam found a good job in Auburn.

Now, he has more responsibilities and less time to see patients.

“It became very clear, very early, with all that was changing rapidly in the pandemic, my group and I, team here and I, talked and I needed to stop seeing patients because there was just so information and so much anxiety and so much planning and so much stuff that needed to happen,” Kam said.

“So for the first few months I really gave up seeing patients so that I could focus on reading everything there was to know and helping make decisions and guiding entities or going out onto campus and doing quick walk-around tours to make sure that things were put in place to keep things safer.”

Now, 10 months into the pandemic, Kam begins his days early, at 6 a.m., with an hour of catching up on COVID-19-related news.

“What I’m reading is information that’s been released overnight from Europe and Asia on COVID,” he said. “Because they’re on a different time zone so they’re releasing data overnight while I’m sleeping.”

Then, Kam heads into the office for a Zoom meeting to talk with Auburn officials.

The executive director said he has more time now to see patients than he did at the start of the pandemic, so he tries to see them in between meetings.

Kam said he tries to make himself available to answer questions from the general public, from businesses, from Auburn students and their families and from the city government.

Even after having been at the office for almost 12 hours, Kam finishes his day up at home by reading more COVID-19-related news that was released during the day.

“[My team is] busy caring for patients; they don’t have time to read all the data, so I have to read the data and then I have to communicate the most important points that they need to know so that they can take the best care of the patients that they can,” he said.

When the pandemic began, Kam was working seven days a week. Now, he said he tries to take some time off on the weekends.

“I’ve never felt overwhelmed mentally,” he said. “I knew this was going to be a marathon, not a sprint, professionally. In my experience, I knew that there was going to be a lot of unknowns, but a lot of information coming. Never in the history of medicine have we had this much information, this rapidly available and this many scientists focused on one subject like we’ve had.”

Part of the difficulty lies with the unknowns, however, Kam said. People want answers, and he doesn’t always have the information that they seek.

“Not being able to give someone an answer to a question that they feel there should be an answer to,” he said. “So, ‘Am I immune?’ Well, we don’t know. ‘Am I going to be one of the first to get the vaccine?’ You know, not sure about that yet.

Sometimes people ask questions or have problems that Kam is able to deal with though.

“This older woman whose husband needed to be tested before he could be admitted into a nursing home and she called around to different places and nobody would do it [because he couldn’t leave his home] and she was stuck between a rock and a hard place, right?” Kam said. “… So I was like, ‘Nope, we gotta do what we gotta do.’ So to make a long story short, we we went to his home, to his house, swabbed him, got the results, got it back to her so that he could be transferred.”

It is experiences like this that make the job worthwhile, Kam said.

Kam was one of six lamplighter award winners whom Auburn Mayor Ron Anders named during his state of the city address in November.

This is the fifth and final piece in a series that highlighted the work these lamplighter award winners have done for the city of Auburn.