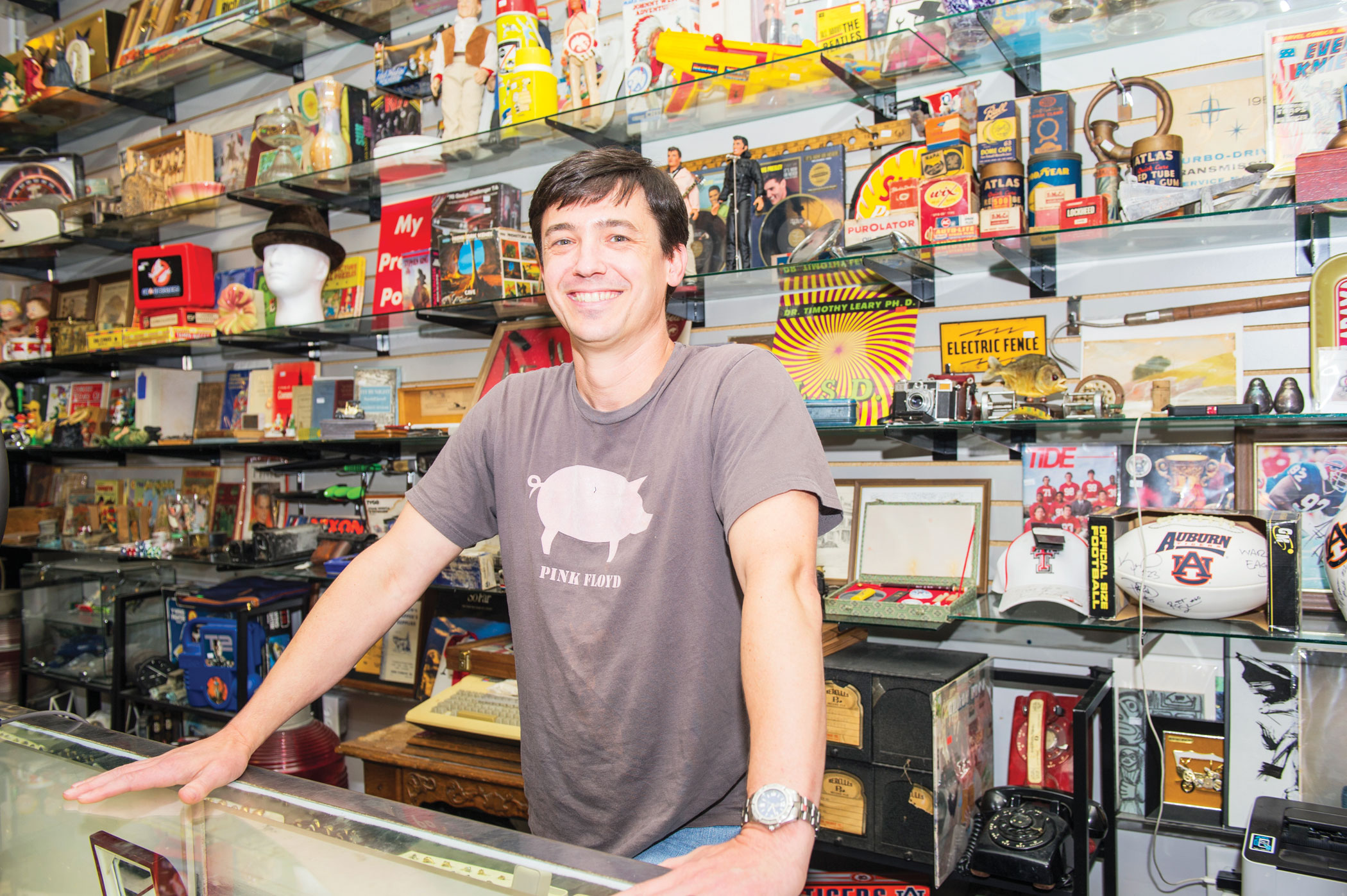 Almost Anything is Opelika’s destination for vintage collectibles

Located next to the Lee County Courthouse in downtown Opelika, Almost Anything is a store dedicated to unifying the passions of the community. Vinyl records, vintage comic books, old guitars and video games are just a few of the collectible items that line its shelves.
Almost Anything’s owner, Aaron Bushey, has run the business for nearly 23 years. Originally located in Auburn, Bushey moved the business to Opelika in 2013, where he said the business has “flourished.”
Bushey, originally from Pennsylvania, moved from there to Hurtsboro, Ala., when he was five years old. He attended a couple of local private schools, but spent his high school years at Lee Scott Academy, graduating from there in 1990.
After high school, Bushey attended Auburn University, graduating with an English degree.
Bushey’s involvement with Almost Anything stemmed from his strong passion for collecting and reading comic books, which he said began at a young age.
“I bought comic books before I was even old enough to read. I read all the classic 80s comics with the Marvel characters, so I guess you could say it has always been one of my passions,” Bushey said.
One night, he paid a visit to the Almost Anything Pawn Shop, located next to the bowling alley on Opelika Road in Auburn.
“I knew the guy who owned it at the time had some comic books and toys, and I went in there mainly to see what he had and what I might could purchase,” Bushey said. “We got to talking and he offered me a job. I was working at an auto parts store then and didn’t need a job, but because it gave me a chance to be around something I enjoyed, I took the job.”
At that time, Almost Anything was called Almost Anything Pawn Shop, and according to Bushey, it was a “typical pawn shop, minus the gun part.” His early observations of the store were that “it was a shell of a business” and “close to being shut down.” An opportunity presented itself for Bushey and his close friend and fellow comic book enthusiast Jeff Richardson, to buy the business, which they did in 1993.
Only 20 years old at the time, Bushey said the hardest part about becoming a business owner was not knowing what to expect.
“When I took over, it wasn’t too daunting or anything. But there isn’t exactly a playbook for business owners. We definitely had to figure some things out by experience,” Bushey said.
One of the first major moves Bushey and Richardson did was to bring in more collectible items, like comic books, adding variety to what the store had to offer.
In the late 90s, Almost Anything experienced changes, with Richardson decreasing his role in the business and Bushey establishing an online presence for the store, in an effort to increase sales.
In 2003, Bushey moved the business to a building on Gay Street next to the well-known pizzeria Brick Oven Pizza.
Despite having a loyal customer base, Bushey said high costs and his inability to mesh the business into the Auburn community were big reasons for him relocating the business.
“One day my stepbrother, John Hardin, drove me over here to Opelika, and showed me downtown and told me what the area was like and how it was growing and changing. He said the area was good, and it was only going to get better,” Bushey said.
In 2013, Bushey decided to relocate the business to Opelika, in a building next to the Lee County Courthouse on Ninth Street. The building needed some renovations, and after several months, Bushey reopened the store.
Bushey said his move to Opelika turned out to be a great decision.
“Immediately after I moved to Opelika, we got involved here. Pam Powers-Smith from Opelika Main Street and the whole group of business owners down here have been incredibly supportive and encouraging, making retail more fun and me so happy to be here,” Bushey said.
A key factor in Bushey’s success has been maintaining a careful eye on what is trending and what is deemed collectible.
“My whole approach as to what I have for sale in the store is this: if I think it’s cool, other people will think it’s cool. I have a broad but not deep knowledge about a lot of things, which helps me know when somebody brings in something to sell to me if it’s worth anything or not,” Bushey said.
The building in which Almost Anything is currently housed in is two stories, with the downstairs portion devoted to the collectible items and upstairs being full of industrial equipment like computers, which Bushey says is mostly, if not all, online-customer based.
The business itself is run and managed by Bushey, along with help from two part-time employees and ‘’on-call people’’ who assist Bushey in computer work or obtaining collectibles.
Looking ahead, Bushey said he is optimistic about the business but will be facing some tough choices down the road.
“My main concern is whether to expand the business or not. I’ve tried in the past to make it bigger and it’s just a lot of trouble. At this point, I’d rather not grow, but stick to what we do, do it well, and have a good time,” Bushey said. “But I feel great overall. I’ve made friends with so many business owners here, and I’m excited to see how we continue to grow and develop here in Opelika.”
Even more important to Bushey is the future of he and his family in Opelika.
“This is a great place to raise a family, and the small-town feel and friendliness of the people is great. Opelika is a phenomenal place to be,” Bushey said.