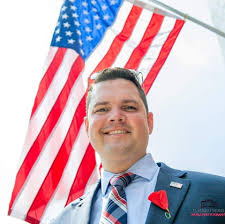 The Community Foundation of East Alabama, Inc. is proud to announce that Todd Rauch has accepted the new position of vice president of the organization. Rauch is a retired U.S. Army Wounded Warrior and is fully committed to serving others to make this world a better place. He has demonstrated his commitment to the community by serving in organizations such as:
• Opelika Kiwanis Club
• Museum of East Alabama
• 20-Under-40 Advisory Board
• Lee County and Smiths Station Republican Clubs
• Lee Russell MPO Citizen Advisory Committee and
• an ambassador for the Opelika Chamber of Commerce.
People may know him as the candidate that ran for District 38 which serves Lee and Russell Counties. He knocked on 7,400 doors in six months, and the run-off was the closest election in the state during the 2018 elections.
Rauch served in various positions during his military career: -combat military police officer in Operation Iraqi Freedom (received the Purple Heart 2003)