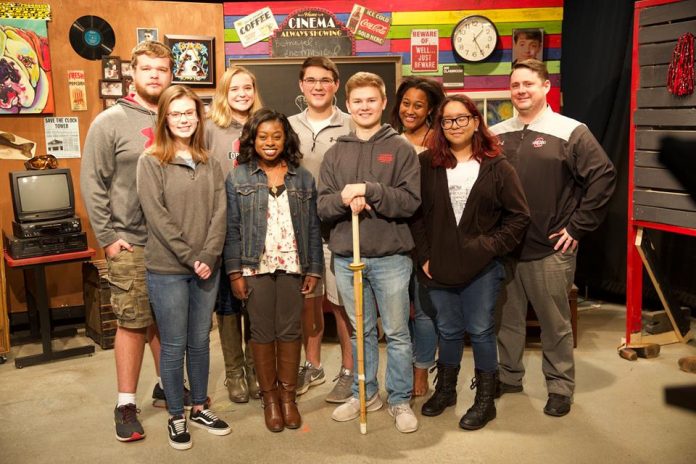 The latest happenings at Opelika High School are documented in a weekly, student-led production called “The Kennel.”
Launched in 2014 by OHS Mass Media/Technical Theater teacher Tracy Tidwell, production of the show allows students to assist in a variety of ways, both on and off camera.
“The kids that have been a part of this have always been invested, they just didn’t have the skills that they do now. A lot of the ones involved now can do almost everything,” Tidwell said. “At this point in the school year, I’m more and more of a guide and less hands on, which shows me that they know what they’re doing.”
Filmed on a set similar in design to that of Rhett and Link’s “Good Mythical Morning” YouTube daily morning program, The Kennel features a variety of school news, information and entertainment designed to appeal to both students and faculty.
“We sometimes find our own ideas and stories that we want do for the show one week, and sometimes we’ll have teachers come in and ask us to promote a certain school club or group – it’s a mixture of us having to find content and then content being brought to us,” said junior Matthew Johnson, who is responsible for athletics coverage.
A majority of The Kennel’s staff hail from the school’s theatre troupe, though adjusting from the big stage to camera can be a challenge, according to anchor Keirsten Gamble.
“The hardest part about this is trying act natural and like you’re not on camera,” Gamble said.
“After a point, you just start feeling like the camera is a third person in the conversation and you’re just sitting there talking to them,” added fellow anchor Wesley Herring.
Through the atmosphere that Tidwell facilitates for his students, on and off-air talent Caleb Eason describes the process of making the show as a time to be “creative” while at the same time “have fun along the way.”
“Like theatre, being a part of The Kennel allows you to be able to laugh at yourself. You want the people who watch it to laugh and enjoy watching it, and that’s mainly at your expense .. once you learn and know that, it makes it a lot more fun and less serious,” Eason said.
With most of the Kennel’s staff working for multiple years on the program, Eason added that he and camera operator Denson Gould plan to continue doing the same line of work in college with War Eagle Productions at Auburn University and possibly pursue video production as a full-time career.
For Tidwell, seeing the joy and enthusiasm his students display on a weekly basis outweighs the hours of work put into the show’s production.
“It’s been great to help these kids along and help them discover their talent. It’s a great feeling,” Tidwell said.
The show will not air for the next few weeks because of finals and Christmas break, but will return once the school year resumes in the early to middle portion of January.
For more information on the program, visit ohs.opelikaschools.org. Each week’s edition of The Kennel can be viewed on their YouTube channel, “The Dawg Network.”