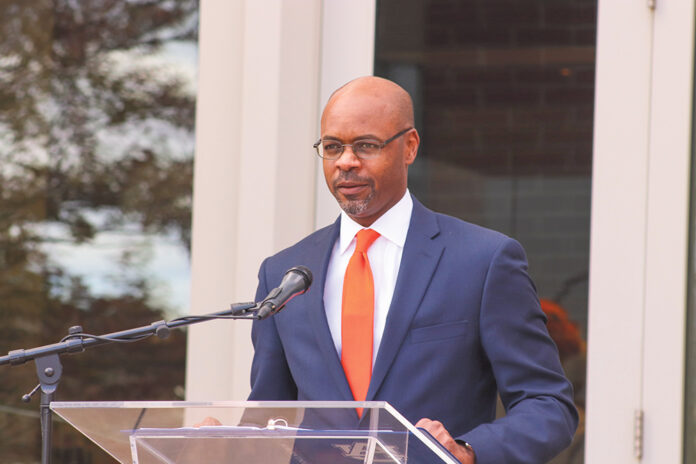 Friday afternoon the university rededicated the student center to Chief Justice of the Supreme Court of Georgia Harold Melton.

The Auburn University Board of Trustees voted unanimously during its September meeting to rename the building as the Harold D. Melton Student Center.

“Thousands of folks have been working in and visiting this beautiful building, especially on game days, which we have simply just called the student center,” he said. “That all changes today.”

“During his tenure from 1987-1988, he worked to improve student life at Auburn and his perspective was impactful in ensuring he would not be the last African American SGA President here,” said current SGA President Ada Ruth Huntley. “He was a part of paving the way for many student leaders to come, including myself.”

After his Auburn graduation in International Business, Melton attended the University of Georgia Law School. Before he became the Chief Justice of the Supreme Court of Georgia, Melton served as the Executive Council to Georgia Governor Sonny Perdue.

“Chief Melton is the walking, talking, living, breathing, embodiment of the Auburn Creed,” Woodard said. “An Auburn man through and through. I can think of no better way to recognize him than naming this building in his honor. This beautiful building finally has a name on it. I am, for one, proud to work in the Harold D. Melton Student Center.”

Melton said that he received a call from the university in August letting him know they hoped to name the student center after him.

“Once I realized they were naming this whole big thing [after me], I was just shaking,” Melton said. “… There were a couple of thoughts that ran through my head. One of the thoughts was just the meaning of what this is for a name, your name, and I thought back to Dean Foy.”

Melton said that he has memories of Foy walking through Foy Union to interact with students.

“It was more than his name on the building, he took that as a role, an assignment,” Melton said. “ … I remember him coming up and saying ‘hi’ and ‘how you doing, you have everything you need?’”

Running for SGA President was not an exercise in endurance, Melton said, but a fun and exciting experience with friends.

There were those, however, who told him not to run, who said his friends would not stand by his side, who said that the university would not want him as SGA president, he said.

“When I had the privilege of winning, my friends were with me, the university was with me,” Melton said. “They were not embarrassed. In fact, they pushed me forward.”

Last year’s SGA President Mary Margaret Turton started the initiative to rename the student center after Melton, said Board of Trustee Member Elizabeth Huntley, who co-chaired the task force to approve the dedication.

“What I want to point out is that it was a white, female SGA president that pushed the initiative for this student center to be named the Harold Melton Student Center,” Elizabeth said. “And then it was the first African American female SGA president that’s finishing it out. And we often talk about black history in this country when I think we need to change our tune and call it gray history.

“Because when we look back on all of the advancements that have occurred in our society, that have advanced diversity efforts, that have advanced humanitarian efforts, it’s always been that side of American that’s the good side. That believes in all of us. That looks at the character of a man and determined that that character should be celebrated. And that’s what significant to me about this day.”

The group, along with Trustee Bob Dumas, presented Melton with an official proclamation for the dedication of the Harold D. Melton Student Center.

“We make real history today. And I just simply want to say that, Chief Justice Melton, you actually honor Auburn by allowing us to honor you today. Thank you.”