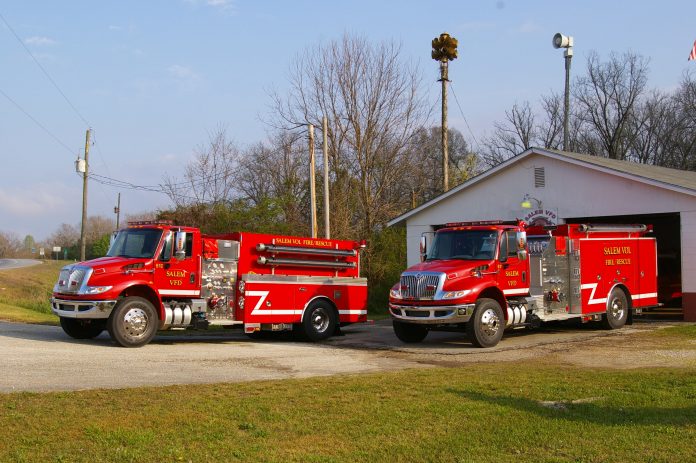 Members of the Salem Volunteer Fire Department welcomed the addition of two new fire trucks last week.
Purchased from emergency goods supplier NAFECO of Decatur, Alabama, the trucks, a pumper and a tanker, possess similar accessories already used by other SVFD vehicles and are designed to meet Insurance Service Office rating standards.
SVFD Fire Chief Cecil Rogers said funding for the trucks was made possible because of a 2012 vote by Lee County residents to increase the annual fire fee rate from $25 to $50.
Accompanied by the fire department’s ISO rating upgrade from a 9/10 to 5/5x, which went into effect last September, Rogers said the improvements will not only increase safety for Salem residents, but benefit them economically, too.
“We told landowners and constituents our plans with the extra money raised from the fire fee was to lower their fire insurance costs, and by doing that, we have been able to increase their fire and medical protection also by the purchasing of newer equipment,” Rogers said. “In the past 15 years, we’ve gone from one pumper and one tanker to three pumpers, two tankers, two rescue trucks and two brush trucks, we’ve finished a second station … and we’re looking at sometime in the next few years of putting a third one in.”
The SVFD is responsible for covering the 115 square miles within the Salem Fire District, which Rogers said is the largest but least populated district in the county. He added that the department’s average call volume is 400 per year, which breaks down to approximately 1-2 calls per day.
Twenty-two members comprise the department’s staff, a group that Rogers said represents the best of the Salem community.
“Our volunteers go through the same training that paid firemen do, so there’s a sense of pride there with all the changes that they, our board and residents have helped make possible,” Rogers said.
For more information or to volunteer, email bradleybowen547@gmail.com. The SVFD headquarters is located at 8703 U.S. Highway 280 E.