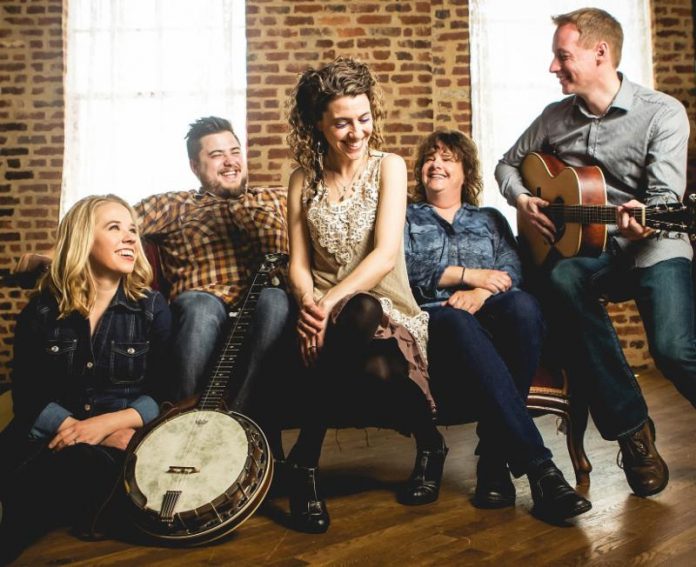 Celtic quintet Runa will be performing at Sundilla on Friday, February 2. Showtime at the AUUF is 7:30; admission at the door will be $15, advance tickets are just $12 and can be found at Spicer’s Music, Blooming Colors, and online at www.sundillamusic.com. Employees of Auburn University and Auburn-Montgomery can pay just $12 at the door. Free coffee, tea, water and food will be available for all, and attendees are invited to bring whatever food or beverage they prefer.
Runa has been enchanting audiences by pushing the boundaries of Irish folk music, since their formation in 2008.  Interweaving the haunting melodies and exuberant tunes of Ireland and Scotland with the lush harmonies and intoxicating rhythms of bluegrass, flamenco, blues, jazz, they offer a thrilling and redefining take on traditional music.
“Runa first played here two years ago,” says Sundilla organizer Bailey Jones, “and we’re bringing them back as soon as absolutely possible, something we knew we’d be trying to do even before the last concert was over. That night was too much fun to do only once!”

The group has been honored internationally, winning Top Group and Top Traditional Group in the Irish Music Awards and an Independent Music Award for Best World/Traditional Song.

Seeking to preserve and continue a traditional culture in a modern age, Runa creates the backbone of its signature roots sound from the musical and geographical diversity of its individually established band members.  Their strive for excellence and creativity blazes a trail for the future of folk music, earning them the reputation as one of the most innovative Irish folk groups of this generation.

Runa consists of vocalist and step-dancer Shannon Lambert-Ryan of Philadelphia, Dublin-born guitarist Fionán de Barra, Cheryl Prashker of Canada on percussion, Zach White of St. Louis on guitar, banjo, dobro, and mandolin, and Maggie White of Kentucky on the fiddle.
As you would imagine from a band hailing from Ireland, Canada, Philadelphia, Missouri and Kentucky, the music reveals a variety of influences but is all held together by their obvious love of things Celtic – as well as from their combined experiences ranging from playing in, or with, Clannad, Riverdance, Slide, Solas and Hazel O’Conner, to name just a few.
“To people familiar with Sundilla, I say ‘Think Harpeth Rising and Act of Congress,'” says Jones. “Not ‘or,’ but ‘AND;’ Runa will remind you of the unmatched musicianship and unbridled energy of both of those Sundilla favorites, all wrapped up in one concert. Which means that calling this concert a ‘can’t-miss’ is an understatement.”
And the only way to not miss it is to be at the AUUF on Friday, February 2, at 7:30. Admission is $15, advance tickets are $12 and are available at Spicer’s Music, Blooming Colors and online at www.sundillamusic.com. Free coffee, tea, water and food will be available, and as always the audience is invited to bring along whatever food or beverage they prefer.