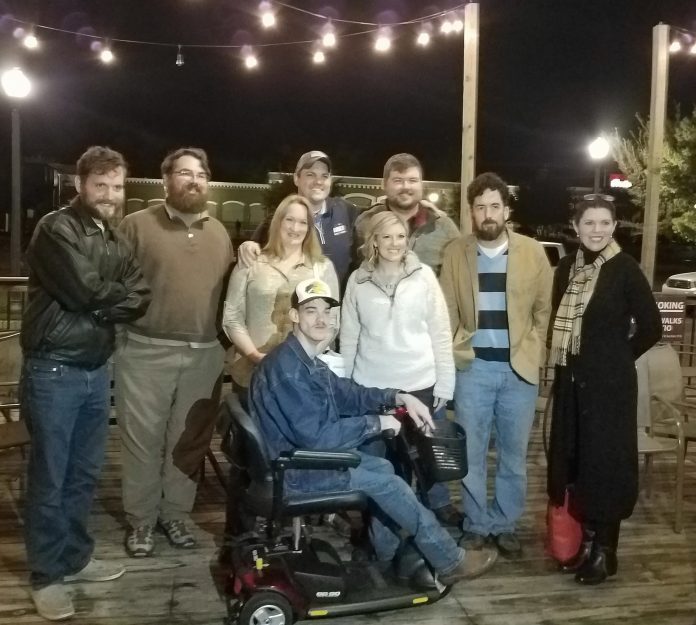 Group comes together to help disabled man in need of scooter

In what has been an intense, often negative political campaign cycle, a group of people from Chambers and Lee counties came together to show that community is more important than politics.
This group of people met earlier this year while working the campaign trail for a candidate during the primary elections. The group is comprised of people from different economic backgrounds, various religious affiliations and different political ideologies.
But those differences did not matter when a need arose. A few days ago, Valley resident Jennifer Krug made a Facebook post about her adult son’s motorized scooter malfunctioning, requiring a replacement which his insurance didn’t deem medically necessary.
Seth Carter, Krug’s son, was born prematurely and was diagnosed with cerebral palsy. He often struggles with walking and the use of a motorized scooter gives him greater mobility.
A member of the group saw the post and quickly spread the word to others and suggested trying to raise the money needed to purchase another scooter for Seth. Within 24 hours, the group had pooled their money together and had enough to buy a replacement scooter near where they lived.
Since the primary election, the group has been meeting on an average of once a month for dinner to spend time catching up with each other’s lives and to just enjoy each other’s company. This month’s dinner was the perfect time to present the scooter to the Seth.
After the meal, the scooter was driven inside the restaurant to the delight of the surprised family.
“It took me just a little bit to figure out what they had done, then I was just overjoyed,” Krug said.. “Words can’t fully express how I feel about this group. They feel like family to me. We all share a special bond and I’m grateful that God put us all together.”
As for how Seth feels about his new ride, Krug stated that Seth talked about the scooter the entire way home and his plans to put a Georgia Bulldog sticker on it.
“Before going to bed tonight, he said, ‘Hey Mom…I got a scooter.’” Krug said.
So, instead of politics bringing out the ugliness of people, this is one example where politics has led to a community of people that have decided to be there for one another in the time of need. The coordinator of this event asked not to be named but offered the following statement: “I’m proud to have been part of this and it goes to show that we are all here for a purpose. In life. we should work to accomplish three things: we should do something, we should be something, and we should leave something. We need more people seeking to unite while impacting the lives of others positively. Seth is a fine young man and is always a joy to be around. He never lets anything get him down.”
Folks, isn’t that what community is supposed to be about?