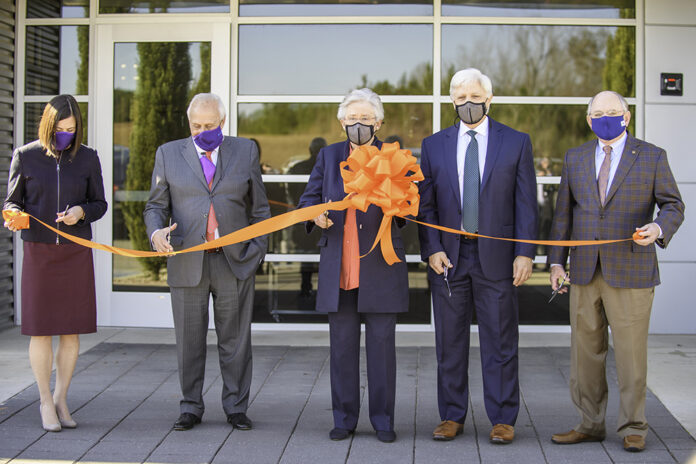 Just as the coronavirus pandemic will one day be taught in history books, the city of Auburn will be found among those pages too — as the home of SiO2 Materials Science.

The Auburn-based company is producing the vials that are used to transport the COVID-19 vaccine.

“Storage and distribution of this incredible feat of health-care innovation would not be possible without the hard work and the dedication of the folks here at SiO2,” Ivey said. “… This Auburn-made company answered the call.”

“We are excited to celebrate the expansion of SiO2 Materials Science,” Anders said.  “And we are proud to be the home of such an innovative company that is contributing to the fight against COVID-19.”

Not only does SiO2’s production benefit citizens across America, including Auburn, by helping with vaccine distribution, but the company has opened job opportunities in Auburn, 220 new jobs to be exact, Anders said.

SiO2 located to Auburn in 2012 and although production of the vaccine vials has been in the works a long time, when the pandemic began, and struck the world with full force, the company began working even harder.

“That SiO2 chose to invest in Auburn all those years ago, shows how truly special our community is,” Anders said.

Over the summer, it launched a $163 million expansion project. The city council recently granted a tax abatement to the company.

“Today is very unusual and a great day, not only to SiO2 but really, distinctly, the state of Alabama,” Abrams said at the ribbon-cutting ceremony. “Without all the help that we’ve gotten from this state, this could not have occurred and this invention very possibly, never would have been finalized.”

The new expansion has also opened more job opportunities in Auburn, hopefully a workforce of 500, the city of Auburn said in a release.

“This contract gives SiO2 the ability to accelerate its production and packaging of the COVID-19 vaccine,” Anders said.

The new facility has 10 production lines and can create 15 million vials and syringes per year, the release said.

“The container that this vaccine is in has to be so pure and perfect that it doesn’t have a negative effect on the vaccine,” Abrams said in a statement provided by the city. “It’s a very complicated product. There is no one else in the world who could make it. This is just the beginning of a whole industry in Auburn, and the science developed there is protected by 300 worldwide patents and 6,000 patent claims.”

The vial is made with both plastic and glass. Glass coats the inside and won’t break, the release said.

The coronavirus vaccine is different than those seen before it, Abrams said, and needed a particularly clean container. He said that SiO2 has not invented a new vial or syringe but a new material inside the vial.

Ivey said she is proud of how the state of Alabama has responded to this pandemic, providing PPE, and vaccine vials, to the nation as a whole.