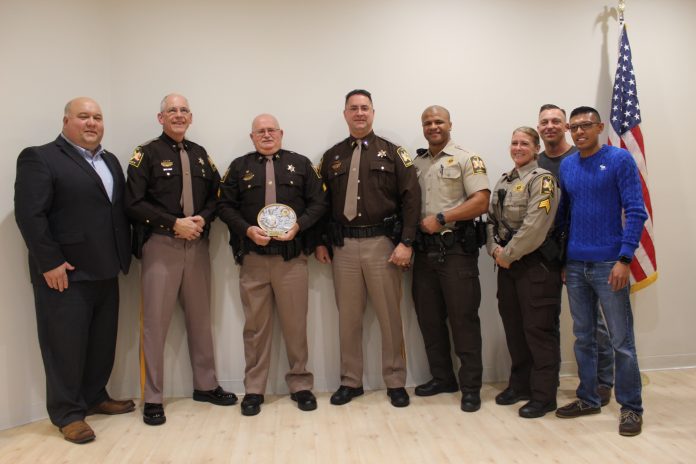 Sgt. Billy Dingler Jr. of the Lee County Sheriff’s Office was presented with the 10th annual “James Anderson Award” during Smiths Station’s regular city council meeting last Tuesday.
Deputy Anderson was struck and killed during a routine traffic stop on Sept. 24, 2009. Since 2010, the City of Smiths Station has presented an annual award named in his honor to officers from the department as a way of recognizing their service and honoring Anderson’s sacrifice.
During the award presentation, Mayor Bubba Copeland told the audience of his longtime friendship with Dingler and expressed his gratitude for his more than 25 years of service with the sheriff’s office.
“I’ve watched you and known you for many, many years … as a friend first of all and then as a sheriff’s deputy. You have always conducted yourself with professionalism,” Copeland said. “Never have I ever seen you do anything selfishly. This award could not be given to a better person than you.”
The council also approved a resolution allowing Copeland to enter into an agreement with Alabama Power for the installation of new lighting fixtures in the Smiths Station Government Center’s parking lot to enhance safety.
In other business, the council:
• received a $2,000 economic development grant check from East Alabama Chamber of Commerce President/CEO Dennis Beson, which can be spent at the city’s discretion
• approved a petition from nearby residents Samuel and Mary Malloy allowing them to annex their property into Smiths Station.
The Smiths Station City Council meet on the second and fourth Tuesday of each month. During the coming months, the first Tuesday’s work session will begin at 5 p.m. E.S.T., and second Tuesday’s will begin at 5:30 p.m. E.S.T., followed by their regular meeting at 6 p.m. E.S.T.
Meetings are held in the council chambers of the Smiths Station Government Center, which is located at 2336 Lee Road 430. For more information, call 334-297-8771 or visit www.smithsstational.gov.