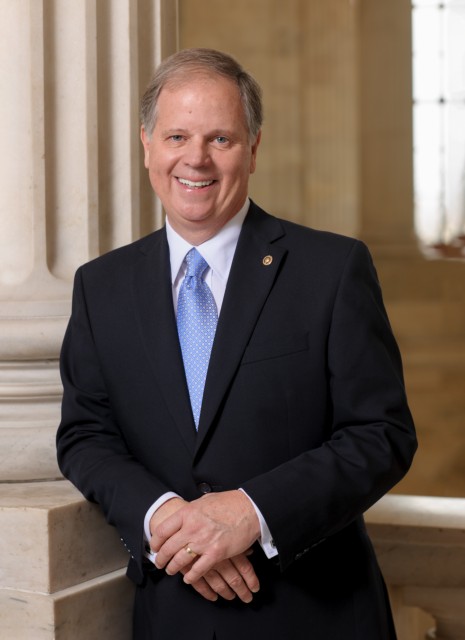 U.S. Sen. Doug Jones (D-Ala.) today announced that the Senate has approved his bipartisan Rural Health Liaison Act, the first original legislation he introduced in the Senate, as a part of the Farm Bill package. Communities across Alabama stand to benefit from increased federal support as part of the Farm Bill that passed in the Senate this afternoon. The legislation, which is undertaken only once every five years, is a comprehensive bill that encompasses a wide range of issues from commodity price supports and rural development to agricultural conservation and food assistance. The version that passed in the Senate today provides protections for Alabama’s farmers as well as critical support for key Alabama issues such as health care, sewage infrastructure, and broadband.
“Farming is a risky venture. Bad market conditions or natural disasters could devastate the livelihood of Alabama’s farmers in any moment. This Farm Bill offers important protections and safety nets to ensure our farmers are covered. Throughout this process, I have advocated to protect our cotton, peanut, and soybean producers among all the other important commodities our state produces. I will continue to do so as the bill moves to a conference report,” Jones said. “I’m also proud to have worked with my colleagues to include my first original legislation in the Farm Bill text to improve rural health care delivery, in addition to addressing several critical needs for the state of Alabama like expanding access to high-speed internet and combatting our sewage system crisis.”
The Senate-approved Farm Bill also includes several specific provisions championed by Jones for Alabama’s rural communities, including:
Health Care
The Rural Health Liaison Act (S. 2894): establishes a rural health liaison at the U.S. Department of Agriculture (USDA) to better coordinate federal resources and expand health care access to Americans who have for too long struggled to receive quality, affordable care in their own communities. Jones introduced this bipartisan legislation last month with Sen. Mike Rounds (R-S.D.) and Tina Smith (D-Minn.).
Sewage Infrastructure
The Consolidated Farm and Rural Development Act (S.2772): expands the USDA’s Household Water Well System Grant Program to provide grants of up to $15,000 to low- and moderate-income households in rural areas for installing or maintaining individually-owned decentralized wastewater systems. Jones was an original cosponsor of this bipartisan legislation introduced by Sen. Cory Booker (D-N.J.) to help address the rural sewage system crisis facing Alabama and other states. Jones has visited impacted Alabama residents in Lowndes County and recently co-hosted a public health fair in Hayneville, Alabama, with Congresswoman Terri Sewell (D-Ala.) to provide information and other resources to the community.
Broadband
The Broadband Connections for Rural Opportunities Program Act (S. 1676): increases the authorization from $25 million to $150 million annually for the USDA to provide loans and loan guarantees for broadband services in rural communities. Jones cosponsored this legislation led by Sens. Kirsten Gillibrand (D-N.Y.) and Shelley Moore Capito (R-W.V.).
The Community Connect Grant Program Act (S. 2654): authorizes $50 million annually for the USDA Community Connect Program, which provides broadband grants targeted to the most rural, unserved, and high-poverty communities in the country. The program expands high-speed internet by providing new grants that will connect unserved households and businesses with modern internet access and streamlines broadband application process. Jones cosponsored this legislation led by Sen. Tina Smith (D-Minn.).
Farmers and Ranchers
The Fair Access for Farmers and Ranchers Act (S. 3117): requires the USDA’s Farm Service Agency (FSA) to provide farm numbers to farmers with certain documentation, including in concert with Uniform Partition of Heirs’ Property Laws in some states. The bill also authorizes FSA to make loans to qualified intermediaries to re-lend to families seeking to resolve heirs’ property issues. Jones introduced this legislation with Sen. Tim Scott (R-S.C.) to ensure that farmers of color don’t face unnecessary obstacles to use inherited land and to help them preserve this important source of wealth for future generations.
The Assist Socially Disadvantaged and Veteran Farmers and Ranchers Act (S.2839) and the Next Generation in Agriculture Act (S. 2762): these two bills were combined to create permanent, mandatory baseline funding to educate the next generation of farmers and reach more minority farmers. Jones was an original cosponsor of both bills.