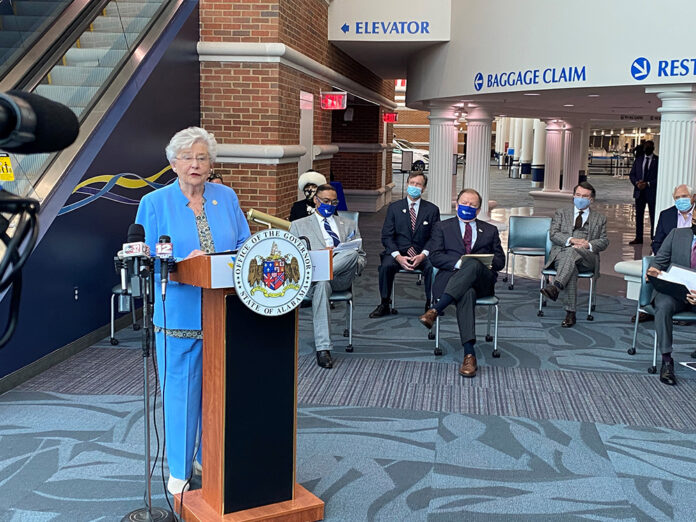 Gov. Kay Ivey held a press conference Thursday and announced that Alabama will continue with the current safer-at-home order.

The order was set to expire on Friday but will now expire on March 5 with no other changes. The mask ordinance is still in place.

The governor said that this should not come as a surprise given the current COVID-19 case rates.

“Even as we continue practicing social responsibility ya’ll, I also want to urge patience,” she said.

Ivey also addressed the vaccine concerns. Alabama is currently vaccinating those 75 and above as wells first responders (police and fire) and medical personnel.

State Health Officer Scott Harris said that the state has reached an agreement with Walmart to begin administering vaccines soon. Additionally, the state is in talks with another large pharmacy, he said, that the state hopes to announce soon.

A website will launch within the next few days which will allow people to make appointments for vaccinations, Harris said.

“I certainly understand the frustration of the people who look at other states and see giant vaccination clinics going on,” Harris said. “I would say those are certainly a trade off. Many of those sites have had their own problems as well.”

Harris said that Alabama will have larger vaccination sites in the future, too, but don’t have the amount of vaccines needed for that right now.

“We are expecting changes from the new presidential administration today,” he said. “A document was published this morning that we had heard about and had mentioned to you before that makes some recommendations about expanding priority groups.”

So far, the state has administered 202,643 vaccines, Harris said, which is different from the number federally reported. The state health officer said that this is just a problem with reporting numbers.

“Alabama’s stream of vaccine is not affected by how many doses have been given or haven’t been given,” he said. “That story circulated this week but in fact that’s not correct. We receive an allocation based on what our population is.”

Harris said many of the doses Alabama currently has are second doses for patients who are set to receive them.

“It’s ultimately determined that a group of Alabamians 65 and older should be in the next eligibility group,” he said. “That’s about 500,000 people in Alabama. So, half a million more people are going to hear the message that it’s time for them to get the vaccine and of course, they’re absolutely deserving. And we will get it to them as quickly as possibly and yet, the amount we’re getting in the state each week is not going to change.

“Our allotment is between 50,000 and 60,000 doses a week. We’ve been told that’s not going to change anytime soon. And so, it’ll be challenging to communicate that message to people that ‘we want you to come in, it’s your time to get it and yet, we still aren’t going to have enough to go around.’”