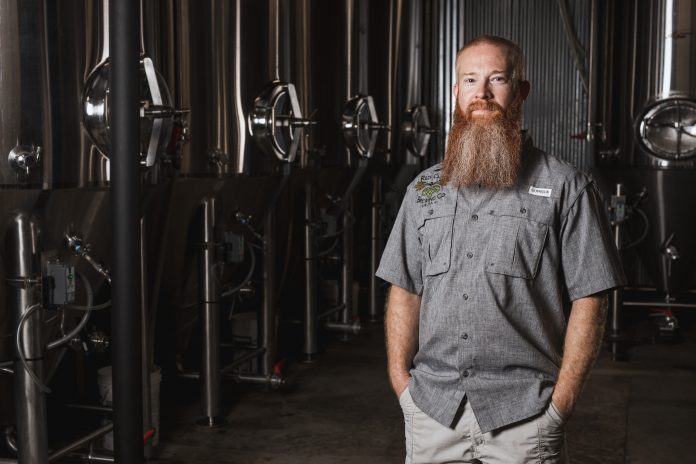 By Rick Lanier
For the
Opelika Observer

“We used to wait for doors to be opened for us, but we’ve since found that there are doors of opportunity everywhere” said Opelika native, Red Clay Brewing Company co-founder and multi-service veteran Kerry McGinnis. “One of the challenges we face is exercising the discipline of not trying to walk through all of them.” That was not always the thought process, however.
“I loved Opelika, it was my home” McGinnis added, “but we were poor, or at least at the time I thought we were, and it seemed like there weren’t many reasons for folks to come to Opelika anymore, it was basically a dead town by 1999.”
Like so many other local young men and women did in that era, McGinnis found himself headed to Great Lakes, Illinois for United States Navy boot camp in August 1999.
After basic training in the snow of North Chicago, “(where) we had snow flurries in August,” McGinnis completed follow-on technical training as a Gas Turbine System Mechanic and reported aboard the Arleigh Burke-class destroyer U.S.S. Roosevelt (DDG-80) homeported in Jacksonville, Florida. There, McGinnis operated, repaired and performed organizational and intermediate maintenance on mechanical components of the ship’s gas turbine main engines, propulsion machinery and ancillary equipment.
When asked about memorable experiences during his time in the Navy, McGinnis vividly recalled a port-of-call in Nassau, Bahamas where he learned the real definition of poor and the meaning of poverty, the emotions of which resonates still today.
“People use the term poverty to compare the ‘haves’ instead of the ‘have nots.’ A true definition of poverty can be found just 90 miles south of Florida, 300 yards over the hill and past the bling of the cruise ship terminal, where families live in homes made of wooden pallets and tarps, who wear shoes constructed of flattened 2 liter bottles tied to their feet with cord – that’s poverty,” McGinnis said. “I learned very quickly just how rich I am as an American.”
By 2003, the United States was fully engaged in the Global War on Terrorism, and as fate would have it, it was also the end of McGinnis’ contract with the Navy. Shortly before re-enlisting for another hitch, he received a letter from the Secretary of the Army explaining that because of a lack of specialty trained personnel, the Army needed McGinnis’ talents to help fill a void in the current war effort. So much so, the Army offered McGinnis a signing bonus of $22,000 and for McGinnis, it was a no-brainer.
“I was going to reenlist anyway, I was going to support our country, plus a bonus as well. It was an easy decision” McGinnis said.
In 2007, McGinnis was discharged from the Army and headed home to Opelika with medals to memorialize his military service, desires for new adventures but at that time there were no plans for opening a brewery. Once reestablished, McGinnis began pursuing higher education by attending classes at Opelika’s Southern Union State Community College campus and then studying biological systems engineering at Auburn University.
“Bio systems is a perfect fit for brewing beer. Fluid dynamics, heat mass transfer, electrical … we do all of that brewing beer,” McGinnis said.
After becoming quite adept at home brewing beer, McGinnis met his fellow co-founders in 2013 and together they decided to give it a try on a much larger scale. After years of saving, preparations and the highs and lows, the trio efforts were brought online in March 2018 with the opening of Red Clay Brewing Company.
Today, McGinnis and his partners are starting to see all of their sacrifices and hard work payoff. Since 2018, the brewery has increased output from 400 to 1,000 barrels of beer annually, they have expanded their business model with the introduction of a full service food operation at Southern Union’s cafeteria, light fare at the brewery and exploratory plans for a mobile kitchen in the newly renovated courtyard behind the brewery.
Additionally, they will soon begin canning their own brew for distribution within the tri-state area.
“The courtyard plans are interesting, it looks like we could host almost a 1,000 people out there and that’s exciting. It’s been hard work but a labor of love,” McGinnis said.
Kerry married the former Lucy Feller in 2010 and they have a 2-yearold daughter Diana Christine.
The brewery is located at 704 N. Railroad Ave. in historic downtown Opelika. For more information, call 334-737-5409 or visit www.redclaybrewingcompany.com.