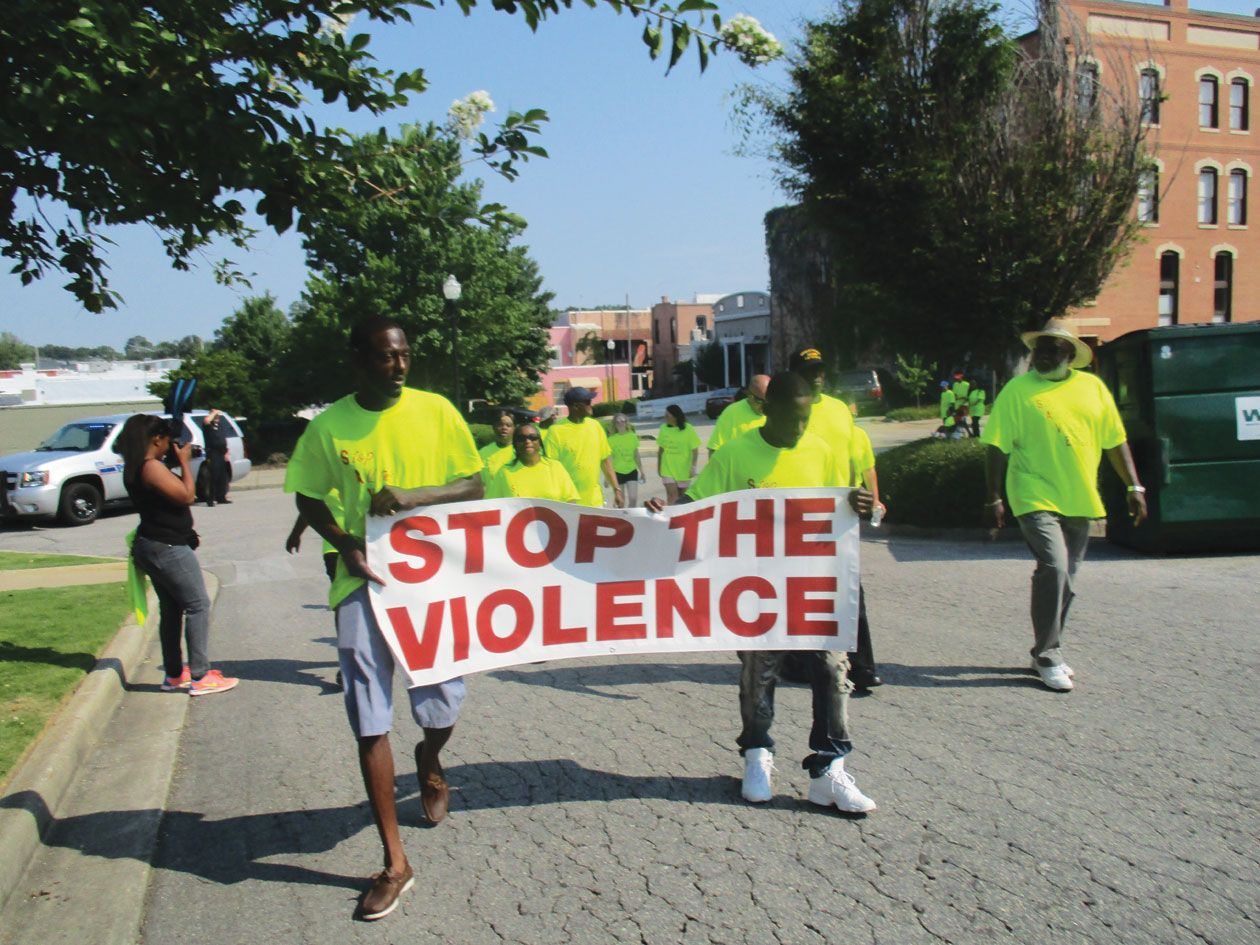 Putting an end to any and all kinds of violence was the focus of Saturday’s SAVE march. A crowd of around 100 people marched from Bethesda Baptist Church down South Fourth Street to the Courthouse Square.
City Councilman Larry Gray, representative of Opelika’s second ward, said the idea for the march was the direct result of a “divine vision’’ he had several weeks ago.
“I was having a hard time going to sleep a few weeks ago. Then, out of nowhere, I had this vision, I believe a divine vision, which God used to speak to me to tell me to have a march like this to raise awareness about violence and try to get rid of it for good here in Opelika,” Gray said.
Gray said he knew this event needed to happen as soon as possible, and with help from the city, Bethesda Baptist Church and Opelika’s health and wellness program Elevate Your Grind, the march came together.
Before the march on Saturday, participants gathered in the sanctuary to hear speeches from Gray and other speakers about the march’s meaning to them and what its impact could be on the community. Before dismissal, a Bethesda Baptist church member lead the audience in an a cappella singing of the staple gospel song “Lead the Way.”
The marchers began their procession to the Courthouse Square at 9 a.m. Well-known attendees of the march other than Councilman Gray included Opelika mayor Gary Fuller and Judge Jacob Walker, validating the event with their support.
After arriving at the Courthouse Square, the marchers posed for a group picture and a final word from Elevate Your Grind founder Jeremy Gray.
“The point of today’s march is to put an end to all violence here in Opelika – domestic, sexual or physical. It all has to stop,” Jeremy said.
Gray compared Saturday’s march to the one the Jews took around the walls of Jericho.
“The violence that takes place here in Opelika is like a proverbial wall, like the one in Jericho. If we raise awareness about this issue and march around this proverbial wall enough, that wall will fall down, and for us, maybe see an end to violence here in Opelika,” Gray said.
Greg Ross, one of the sign bearers in the parade, said he feels that this march happened at the perfect time.
“There is so much violence that happens here in Opelika. Having this march is something that can let young people know violence isn’t cool and something that needs to stop,” Ross said.
With a solid turn-out and strong support from the community, Gray said he felt that the march was a success.
“We’re all here today because we love Opelika and want this to be a place where we can feel safe and give kids a chance to grow up without their parents having to worry about them. I would love to see Opelika be violence-free and the safest community in Alabama,” Gray said.
In regards to future plans for similar marches, Gray said it is definitely something he will consider.
“Seeing all the walks of life out here, and blacks and whites out here working together toward a common goal, it definitely makes me want to do it again. It may be annual, or a couple of times a year,” Gray said. “I think of this march as like an earthquake: it started over here on the south side of town, but the waves were felt all over Opelika. I hope that this movement impacts the lives of everyone in Opelika for good and that, one day, this community can be violence free.”