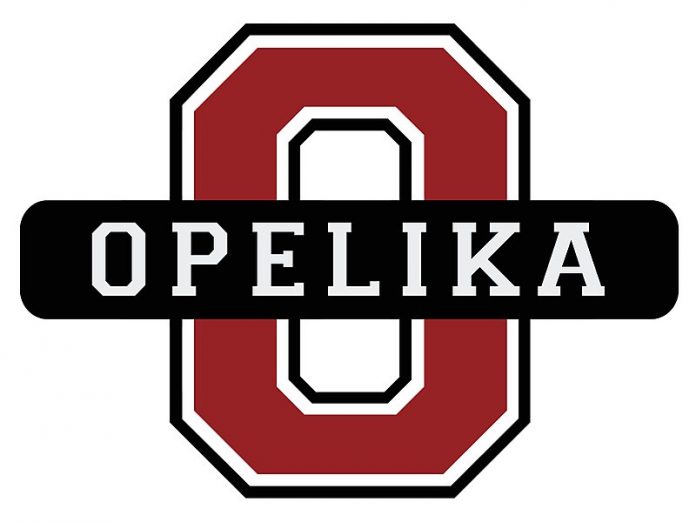 Opelika High School (3-4 overall, 3-1 in region play) defeated Calera 30-10 last Friday night in the first-ever meeting between the two programs.
The two region foes could not manage much offense in the first half. Marshall Meyers put the Bulldogs up 3-0, kicking a 22-yard field goal with 7:35 left in the first quarter.
Cade Blackmon threw a 13-yard pass to Jamius Mitchell for a touchdown, with Meyers adding the extra point to give Opelika a 10-point lead with 8:21 left in the first half.
Calera’s only touchdown occurred after recovering a muffed punt by Opelika at midfield.
The Eagles used a mixture of the run and pass to move downfield and score.
Running back Ashton Shoddie plowed in from two yards out to score their only TD with 3:23 left in the second quarter.
On the ensuing possession, Calera blocked an Opelika punt and recovered at the Bulldogs 5-yard line with fewer than two minutes to play, but Bulldogs defender Kory McCoy ended the Eagles’ threat with an interception in the end zone.
Opelika scored three TDs in the third quarter to seal the win. Brantan Barnett rushed for two scores on runs of two and 23 yards while teammate Eric Watts sprinted 43 yards for a score. Meyers made 3-of-4 PATs and added one field goal.
Calera added a 22-yard field goal early in the fourth quarter, making the final score 30-10.
HUGE REGION GAME
The Bulldogs host Stanhope Elmore Friday night at Bulldog Stadium in a key region game.
The Mustangs enter the game 5-3 overall and undefeated in the region with a 4-0 mark.
A win over Opelika earns Stanhope Elmore the region championship. An Opelika win could leave a three-way tie for first place in the region, if Wetumpka beats 1-7 Selma.
Opelika and Stanhope Elmore have played two prior games, both in the playoffs. The Bulldogs won 45-20 in 2008 and lost 24-10 in 2010, both first-round playoff games. The Mustangs are coming off two-straight wins, 31-20 over Selma last week and a 34-28 win over Wetumpka two weeks ago.
The Mustangs have scored 218 while allowing 142 points.
Look for Opelika to use the friendly confines of Bulldog Stadium to their advantage. This will be the third home game and last region game of the season.
If the Bulldogs control the lines of scrimmage, make no turnovers and played inspired football for 48 minutes, I believe that they will be able to win.
Fans can purchase tickets at Bubba’s Medicine Shop and Victory Design prior to noon on Friday. Gates open at 5:30 p.m.
FRESHMAN
FOOTBALL
The Opelika 9th grade team fell 22-0 to Wetumpka last week. The team played without several kids because of injuries. The team was scheduled to play Auburn last night. No details were available as of press time.
VOLLEYBALL
The Opelika volleyball team beat Park Crossing 3–1 for their 10th win of the season.
The Lady Bulldogs travel to Smiths Station Wednesday and Auburn Thursday, with both matches starting at 4:30 p.m.
Coach Robin Roberts’ team host the Area tournament after winning the regular season title with a 3-1 record.
D. Mark Mitchell is sports director for iHeart Media, Alabama Dixie Boys State Director and vice president of the A-O Sports Council