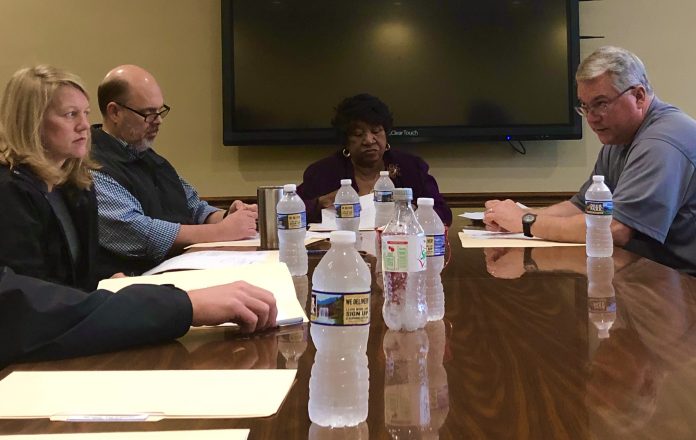 The first resolution was a statement of opposition against a proposed granite quarry that Creekwood Resources of Florence is looking to construct just north of the city limits, a development that OCS Superintendent Dr. Mark Neighbors said would cause lasting repercussions on the environment and Opelika’s children.

“We’re working very close with the city and planning to send a copy of this resolution to ADEM and the closest regional EPA office,” Neighbors said.

OCS Public Relations Coordinator Becky Brown added that the school system is working to raise awareness on this issue by distributing yard signs to parents and sending students home with copies of a form letter that students can fill out and send to ADEM in opposition to the quarry’s development.

“We’re trying to get the word out that the most important thing they can do is (fill) out the letter to oppose it and ask for a public hearing,” Brown said.

While no date and time has been set for a public hearing on the quarry, Neighbors said the school system would be willing to host the event at the OPAC within Opelika High School.

The second resolution pertained to a piece of legislation that has not yet been filed by the Alabama Legislature but could possibly come up for a vote this legislative term. According to Neighbors, this bill is being pushed by the state’s summer camp and tourism industries to unify all Alabama public school systems under one schedule window as a way of extending students’ summer break.

“It looks like if you do what they want, then you won’t start before Labor Day and won’t finish until Memorial Day. You would get off on Thanksgiving Day, then have Christmas Eve and maybe a week … and that would be about it,” Neighbors said. “The biggest thing is that this community needs to decide on school (schedules), and we have. We plan on passing this resolution along to our governor and state legislators.”

“We’re just asking to let us make our own schedule,” added Dr. Kevin Royal, one of the board’s five members.

Neighbors explained that a number of issues would arise from this legislation, including extended school days for students and teachers and drops in participation among the school’s extracurricular programs.

For more information, visit www.opelikaschools.org. The Board of Education facility is located at 300 Simmons St.