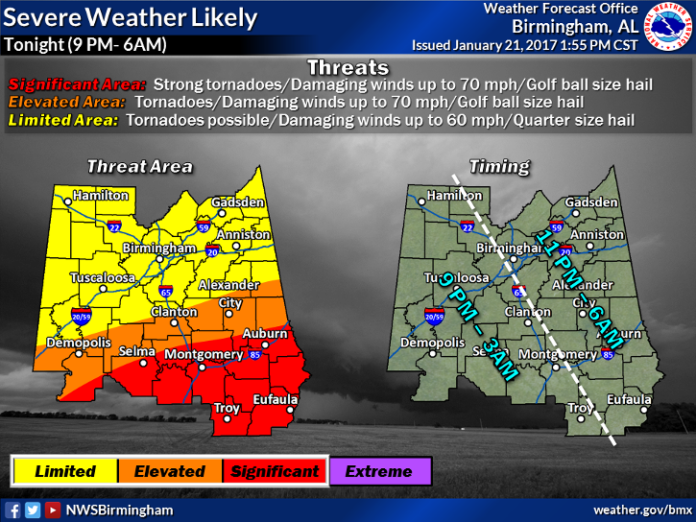 The National Weather Service in Birmingham issued an alert Saturday for the south Alabama. All of Lee County is included in this severe weather forecast zone.

The latest forecast predicts a significant risk of severe weather, including potential tornadoes Saturday evening through Sunday afternoon. A tornado warning was issued Saturday morning for Lee County and reports of damage on Ballard Avenue in Opelika and The Freshman Complex and Baseball Fields in Smiths Station reported damage. Rita Smith of the Lee County Emergency Management Agency said there were reports of an unconfirmed tornado in Opelika.

The potential for flash flooding is also a concern with this system. The next round of storms is predicted to arrive after 8 p.m. in the Opelika area and lasting through the evening, with a second round forecast to arrive Sunday after 10 a.m. Residents are advised to have their NOAA Weather Radio or other source of weather information nearby in the event storms become severe overnight.

Weather discussion from the National Weather Service in Birmingham:

This morning storms moved out quickly, with clearing skies and leaving warm temperatures in their wake. A stalled frontal boundary stretches from the gulf coast near New Orleans, La. to Mobile and then angles to the northeast and cross far southeastern Central Alabama and into Georgia. This front will be key in the potential for severe storms tonight. A strong upper level impulse ahead of the main trough will rotate into the area tonight, with both a low level jet intensifying across the area and the upper level jet nosing into the area from west. This will push the stalled front back to the north, with the airmass south of the front becoming increasingly unstable. Bulk shear values support updrafts and thunderstorm development, while low level shear is supportive of tornadoes, some of which could be  strong.

The highest threat area will be across south Central Alabama, generally near and south of the US Highway 80/I-85 corridor, but will also be contingent on how far north the warm front lifts. To the north of the front, storms will likely be elevated, but pose a risk of damaging winds and large hail. Heavy rainfall is also possible, and with saturated ground conditions, if and where storms train over the same area, localized flooding in urban areas and small streams will be possible. See the HWO and graphics on our website for more information.

This wave of storms will be end from southwest to northeast, moving out of the area around 6 a.m. There is a low chance of another wave of storms across the southeast tomorrow afternoon, but that is dependent on how storms evolve overnight and how/if the airmass can recover ahead of another upper level jet expected to move across that area in advance of the approaching upper level trough. Confidence is very low in whether this threat materializes.