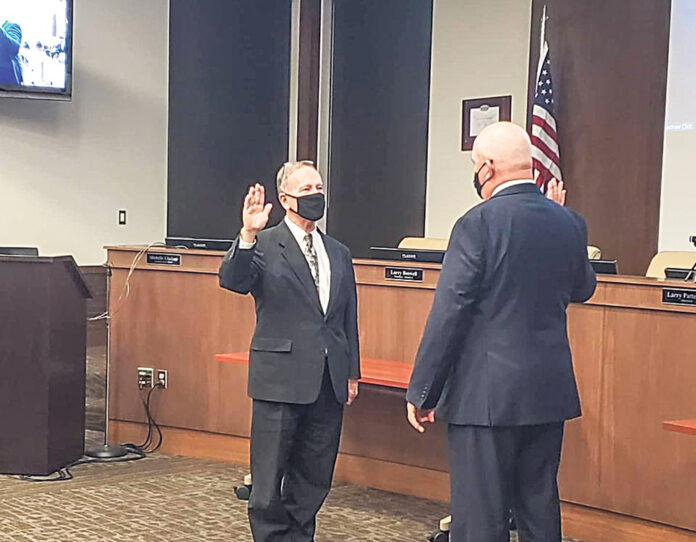 The Lee County School Board swore in a new member and decided on its president and vice president for this term during its regularly scheduled board meeting on Nov. 10.

Mark Tomlin was sworn in by Lee County Probate Judge  Bill English at the beginning of the meeting. Tomlin will represent District 1 on the school board.

Larry Boswell was reappointed as president of the school board. “Thank you for your confidence,” Boswell said. “I look forward to serving in this next year. I’ve enjoyed serving in my time as president, and I hope I’ll be able to serve for a while.”

The board appointed a new vice president, Ralph Henderson of District 5. “Thank you and I appreciate the confidence and trust, and I’ll do the very best job I can do,” Henderson said.

The board also heard three community speakers, all on the same  subject: the termination of Gregory Nelson and James Sasser, who  were fired for what they claim was a freak accident that was the result of their following instructions.

The two were hauling an enclosed trailer containing approximately 30 gallons of gas behind their vehicle, when a pedestrian got their attention and got them off the road, according to Sasser. The pedestrian told them that their trailer was on fire, and the two ran clear of the vehicle before it went up in flames.

Sasser said that when firemen showed up, they told him that the amount of gas in the trailer was too much to be hauling in an enclosed trailer and that Sasser and Nelson should be grateful to have their lives. “I just want y’all to think about it and what it would be like,” Sasser said, “Because it’s gonna be a disaster in this pandemic to go out there trying to look for a job in this economy with this saying I’ve been terminated from this job.”

Nelson, Sasser and Sasser’s wife, Sharon, asked the board to reconsider Sasser and Nelson’s employment.

In other business, the board:

The Lee County School Board meets at 6 p.m. on the second Tuesday of every month at its central office at 2410 Society Hill Road.