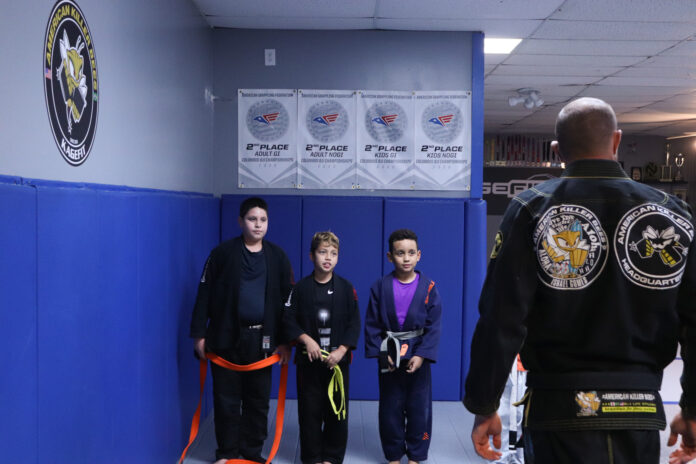 Story and Photos By Hannah Lester

If you’ve watched MMA on TV and thought to yourself, “Wow, I wish I could do that,” then there’s good news. You can.

KageFit is a mixed-martial-art school in Auburn that offers Brazilian Ju Jitsu, boxing and Muay Thai.

Shane Mills opened KageFit eight years ago after learning more about, and competing in, MMA.

Mills is a life-long local. He attended Opelika High School and graduated from Lee-Scott Academy. He found Ju Jitsu in his late twenties and took off from there.

“I found Ju Jitsu out of necessity because I wanted to compete in MMA,” he said. “I wanted to step into the cage and fight a couple of times, at the time, just as a bucket-list [item].”

After a few years of fighting and intense training, Mills decided to step back and become an MMA coach.

“After a few years of that, I decided, this is what I want to do,” he said. “Because I had early success coaching guys. I was like, well, I can do this. So we just decided to open this place up.”

KageFit is truly a family business. Mills owns the business and teaches classes, his mom works the front desk and his daughter trained with him for years.

Not only is KageFit run as a family, but the classes are geared for families too. KageFit has classes for both adults and children.

“I have a large group of kids that’ll be doing Ju Jitsu on the front mat and their parents will be doing fitness class or a boxing class in the back simultaneously,” he said.

“[Ju Jitsu] is a ground-based form of submission fighting which is probably, in my opinion, and in numerous others in our profession’s opinion, the best form of self-defense on the market right now,” Mill said.

Mills said that Ju Jitsu is a great sport for both children and women who want to learn self-defense.

“The basic principal of Ju Jitsu is to defend yourself against somebody who is much larger than you, using only technique and leverage,” he said.

Muay Thai and boxing are the classes focused more on striking and kicking, but don’t worry, because if you attend a class, no one will be striking you, Mills said.

“… That’s one of my favorite things to watch is to watch people progress, whether or not it’s in Ju Jitsu, Muay Thai or boxing. How they come in with absolutely no experience and know nothing about what we do and then within a year, they’re a full-functional boxer.”

One of the best benefits, Mills said, is stress relief and the ability to unwind.

“When you come in here, it’s not like a normal gym where you’re lifting weights and then you’re stopping for 30 or 40 seconds and lifting more weights and stopping for a couple minutes or you’re just on a treadmill running endlessly going nowhere, you come in here and our functional strength workouts, they’re high-intensity but everyone can do them.”

The KageFit team participated in the Georgia Winter Classic in December, where the youth team placed 13 out of 75 and the adult team placed 1 out of 75. The scores placed KageFit in second place overall, Mills said.

Mills said he has watched as MMA has become a mainstream sport and more and more people in Lee County have shown interest.

Some of his younger students practice at KageFit full time and do not play other sports. Other students use the skills Mills teaches to apply to activities like wrestling, and some train at Kage Fit during the off-season for football or basketball.

Mills tries to teach his students life skills, in addition to physical skills.

Mills said that his younger students, those in middle school and high school, can learn the skills they need to defend themselves from bullies, not just physically but mentally and verbally.

“Once kids realize that they can physically defend themselves, it’s so much easier for them just to walk away from the verbal altercation, the name calling and that’s like water off a duck’s back to them because it doesn’t affect them,” Mills said.

There is a lot to learn in competition, too.

“You have to learn how to process losing, which I think is an important life skill,” he said. “I’m not big on participation trophies. We even have it written on the wall there, ‘In Ju Jitsu there’s no losing, only winning and learning. So you win, or if you lose, there’s something valuable to learn from that.”

Mills said that over the eight years KageFit has been open, he’s had parents come to him and say that the skills he taught their children carried over into other areas of their life.

“To me, the most important thing for kids is not only winning, but learning and becoming better people.”

KageFit is for younger children too.

James Gray Fenn is only three years old and has been training since July.

“We wanted to toughen him up a little bit,” said his mom, Mallory McCain.

James Gray’s father, James Fenn said that they’d heard how good Shane was with children, too.

Mills tries to make the classes fun for children. James Gray said his favorite part of the classes was when Mills set up an obstacle course.

McCain said that since they home-school pre-school James Gray, KageFit gives him an opportunity to socialize. But both parents said that the classes have built confidence in their son.

“In six months his confidence has grown so much, it’s unreal,” James said.

When Mills trains his adult students, there is a bigger focus on physical skills, rather than life skills.

“A lot of adults are already set in their ways so they’re already going to feel the way they feel about certain situations, it’s not as much life preaching as it is more of having them understand a competition mindset, and a training aspect, and how to prepare their body, and how to take care of their body, how to eat properly, how to rest properly, how to train properly without injuring themselves,” Mills said.

Tommy Hadaway has been training at KageFit for four years.

He said that years before he’d trained in karate but had gotten out of shape.

“I came here to try a fitness class,” Hadaway said. “I liked it a lot, it was really impressive, I can’t say enough about it.”

A year later, he joined more classes, like Ju Jitsu and Muay Thai.

Hadaway said that he’s become comfortable with the group that trains in the morning and they push him to be as good as they are.

As far as KageFit goes, Mills has big plans. He said he’d love to expand and attract more students. The dream is to become world-renowned, he said.

“This is what I thoroughly enjoy doing,” Mills said. “It is a passion of mine. It brings me so much happiness every day.”