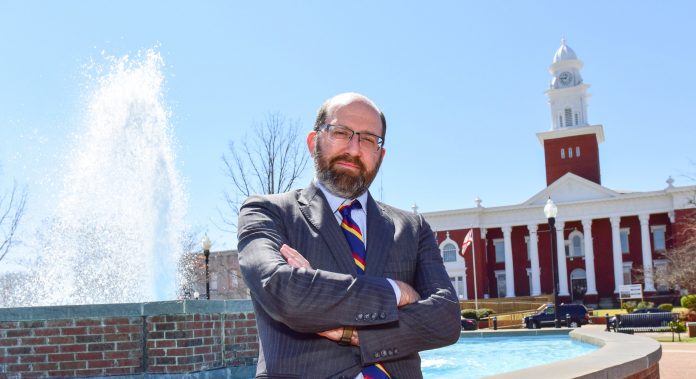 Adam Jortner, a professional educator, stakes his campaign for State Board of Education on reducing standardized testing and wants to bring back emphasis on vocational education (career tech), civics, and history that are lost due to test prep based solely on math and reading.
Jortner will host a meeting Oct. 24 with Heather Milam, Democratic candidate for Secretary of State.
He is bringing his campaign against standardized testing home to Lee County for the final weeks of the campaign. He summarizes his campaign by pointing to his rally fans. One side reads, “Adam Jortner for State Board of Education.” The other side reads: “We CAN reduce standardized testing.”
Jortner has made reducing testing a cornerstone of his campaign for this little-known office. He will host a meeting with concerned parents Oct. 24 at 6:30 p.m. to explain his campaign nd his plans to “take back” Alabama’s schools. The meeting will be held at the Lee County Democratic headquarters, located at 1775 Opelika Road in Auburn.
“Standardized tests are strangling our schools,” Jortner said. “Alabama has made testing the only thing that matters. So all kids learn is how to take tests.”
Federal demands like No Child Left Behind and Common Core bear some responsibility for the massive testing in Alabama, Jortner says, but “We choose to test more than we need to.” Instead, Jortner promises to save the state money by doing less testing and including vocational educational programs in evaluations of Alabama schools.
This idea resonates with a wide variety of people. Sarah Price, a volunteer for Jortner, recalled handing out the fans at one rural high school game: “Folks from deep-red Geneva County and blue Barbour County were both excited,” Price said. “Adam’s campaign offers a real chance to change Alabama’s schools, and he’s going to get a lot of crossover votes.”
Jortner will meet with local parents at 6:30 p.m. in Auburn, followed by a visit from Heather Milam, Democratic nominee for Alabama Secretary of State, at 7 pm.