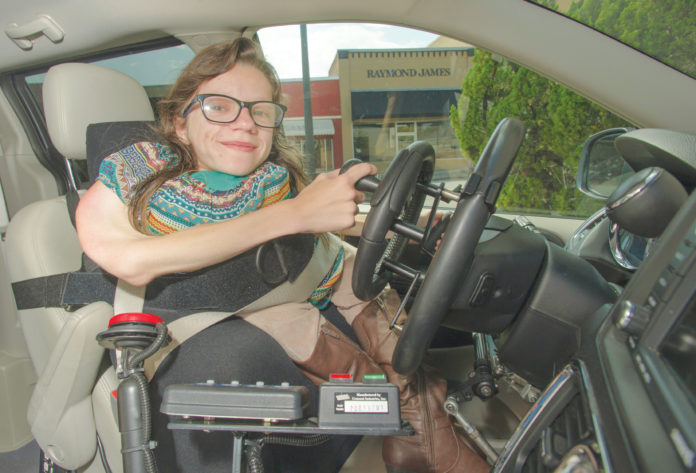 This month, Danielle Tadych was able to achieve one of her life’s biggest goals – obtaining a driver’s license.
“This whole experience has been like living in a dream,” Danielle said.
The 24-year-old Opelika native and Auburn University master’s student was born with Osteogenesis Imperfecta, a genetic disorder distinguished by brittle and often breakable bones that result from a lack of bone-strengthening collagen.
Wheelchair-bound her entire life, Danielle said transportation was never an easy venture for her and her family.
In August 2014, the community came together through an East Alabama Medical Center initiative called Coins4Care to raise sufficient funding for Danielle and other children’s families to purchase wheelchair-accessible vans.
Six months later, Danielle and her family traveled to Atlanta’s AMS Vans to purchase their new vehicle.
With a new van and several months of driving lessons from Alabama Department of Rehabilitation Service instructors, she was now a step closer to driving on her own. However, she still needed several modifications that would cost nearly $20,000 to install.
Last August, Danielle said ADRS stepped in and offered to pay for the modifications, which were finished earlier this year.
Custom made by Gulf States Mobility in Wetumpka, Danielle’s van now has a special seat that allows her to easily access the steering wheel, brakes and turn signals.
With the van, Danielle said she is now fully independent, and is excited about her new chapter in life.
“Two years ago, when all this started, we didn’t know if it was going to happen. We hoped and prayed, and then the Opelika community stepped up … it’s been amazing,” Tadych said.
Len Tadych, Danielle’s father, said he is forever humbled by the love, help and support that the community has given to his family.
“This is just another situation where the community stepped up to help us. I don’t think Danielle could be the person she is without all the different people who have helped … too many to mention,” Len said. “Her having her own van, her own apartment, her own life … it’s more than we could have ever hoped for.”
Danielle is currently working on her master’s degree from Auburn University’s Agronomy and Soils department, with a focus on climate modeling. To keep up with Danielle, like and follow her Facebook page, ‘Change Danielle’s Life’.