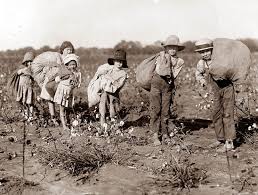 Man, I was always glad for school to start back. It was not, you understand, that I had much reverence for Academe. But consider the alternative: work. Yessir, school bells were welcome music to my ears.
Back then, for an experimental few years, we’d have a cottonpicking schedule. In some counties, they’d start school a few weeks early and then let everybody out completely for a like number of weeks so the young scholars could help with cottonpicking. Our school’s bow to the King wasn’t quite that deep, but we would go on a half-day schedule for a few weeks during the critical harvest period.
You never saw such a defender of education as I was then. Oh, I’d carry on about how important it was to have the full day of schooling, learning, training, so that we could go out to make our place in the changing world with a solid base of knowledge in our eager young heads. It was really plumb inspirational, now that I look back on it. And completely phony. I had no greater craving for schoolroom learning than anybody else, but my aversion to the plucking of the soft white stuff from its pointed protective burrs bordered on the maniacal.
And I was lucky. Daddy, with the typical awe of formal education of those who couldn’t get as much of it as they wanted, regarded it as something sacred, almost, and not to be interrupted, so he wouldn’t make me stay home from school to work as many of my classmates had to do. And I knew he wouldn’t, so I was a firm supporter of 12-month schooling. I was all for making our little country school the foremost fount of knowledge in the universe, if it’d just keep me out of the cotton patch.
I’d still have to pick cotton. I was one of the worst cotton pickers in the whole annals of cottonpickingdom.
Granted, I didn’t really have my heart in it. I expended approximately as much energy griping about it as I did in the acual picking, all to no avail. But even on the rare occasions when I’d really honestly try, when I’d say that, by George, this time I was gonna pick more than Willadine or bust a gut trying, I wouldn’t. She’d just mosey along, easy as you please, while I’d be frantically clawing at the cotton. She’d condescendingly turn around and help me keep up with her, or worse, lie down on her sack and rest a little while till I’d get up even with her. And when weighing time would come she’d always have more in her sack than I’d have in mine. I’d get her, I’d mumble. A nice heavy green cotton boll up side the head would be good enough for her.
Wynell could outpick me. So could Anna Banks and Polly and Nell and Norma and Virgina and James and Ross and Turner. All the Reeveses could pick circles around me. As far as I have been able to ascertain, every person in the county under 90 could, and I may have set the age limit a tad low.
Momma and all the other farm wives in the community could easily outpace me, and that was even after getting there late in the mornings after breakfast, taking out an extra hour at dinnertime to cook it, and leaving early in the afternoon to go home and fix supper.
Something, some voice, seemed to be telling me all along in there that my divine mission in life was not the gathering of cotton. And I didn’t have to be blinded and knocked off a mule to believe it. That voice and I had the most complete rapport you ever heard of. “Tell them voice, tell them. I’m a believer,” I’d think.
So I didn’t have to be prodded to meet the little school bus, the one on the pickup that Uncle Kelley drove, when it came around. Not me. I’d be there with my poke of tomato sandwiches and peanut butter and jelly sandwiches and my little bottle of milk, ready to go when he’d come whining up the hill from Early Matthew’s house.
There’d still be plenty to do when I’d get home from school; but there for a few brief hours there’d be a blessed respite. I haven’t fully researched the matter, but I would hazard an educated guess that the public school system was set up by people who hated to pick cotton. There were saints in those days.
Bob Sanders is a retired local radio personality, as well as a columnist, author and raconteur of note. He can be reached at bobbypsanders@gmail.com.