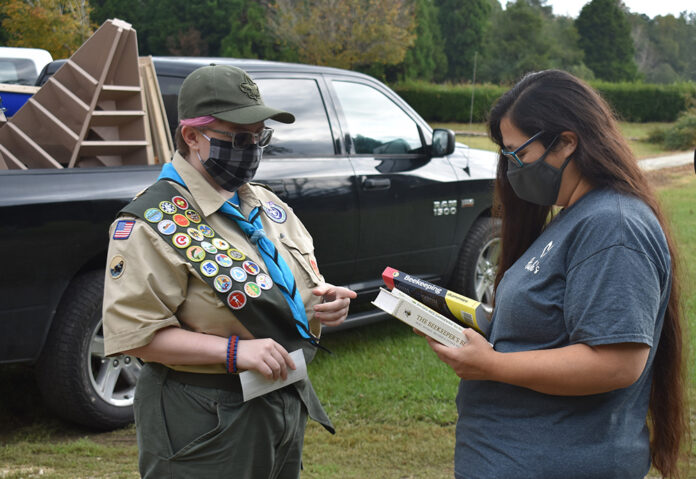 Claudia Mattingly, a 16-year-old Auburn High School student, presented her Eagle Scout service project on Friday. She will soon go in for a board of review to find out if she has done enough to achieve Eagle status in the Boy Scouts of America (BSA) program.

Her Eagle coach (an adult who coaches a scout through the process of achieving Eagle status) Kevin Harp said, “By the time they get to this point, it’s rare that somebody gets turned down. We do like a job interview, basically, and either approve or deny their eagle advancement.”

“I’ve been in scouts since February 1st of 2019, which was the first day that females were officially allowed into the scouts BSA program,” she said.

Mattingly said that she decided to join BSA when she saw, via her brother’s involvement, what she was missing out on by being in Girl Scouts.

“Her brother’s been in scouts for eight years now, and she did Girl Scouts at first, but it wasn’t really what she liked to do,” said her father, Joe. “Then she went along with some of his stuff, and she loved it. She was mad that she couldn’t get the stuff that he was doing.”

The final service project was delivered to Haddie’s Home, a “Christ-centered home environment of trust and hope where girls in crisis have an opportunity to see God fulfill His purpose for their lives,” according to its website (www.haddieshome.com).

“An Eagle project is basically the big, final thing you need to do to earn Eagle rank,” Mattingly said. “It’s a community service project that you plan, you do the budgeting, you do the fundraising, you plan who’s gonna be there, who’s going to do the building at what time and you deliver it.”

Mattingly  and Elizabeth Hancock, the executive director of Haddie’s Home, had coordinated what kind of project the home would benefit from. After hearing that the home was trying to build a garden, Mattingly made plenty of suggestions, ultimately settling on building two planters and two beehives.

“We really hope that the impact for our residents will be to see that people in the community care about them,” Hancock said. “But also that they can now learn and grow and develop new skills while they are here.”

Along with the planters and beehives, Mattingly provided two books on beekeeping, another on raised-bed gardening and a check that will cover at least the cost of the first generation of Haddie’s Home bees. She also did enough research that she’ll be able to answer any questions the people at Haddie’s Home have about using the planters and hives.

“I’m really, really proud of myself,” Mattingly said. “I’ve run into a little bit of [hate for being a female in BSA], but most of the time I just shrug and let them live how they want to live; I have fun, I know that the girls in my troop have fun. What they think shouldn’t matter.”