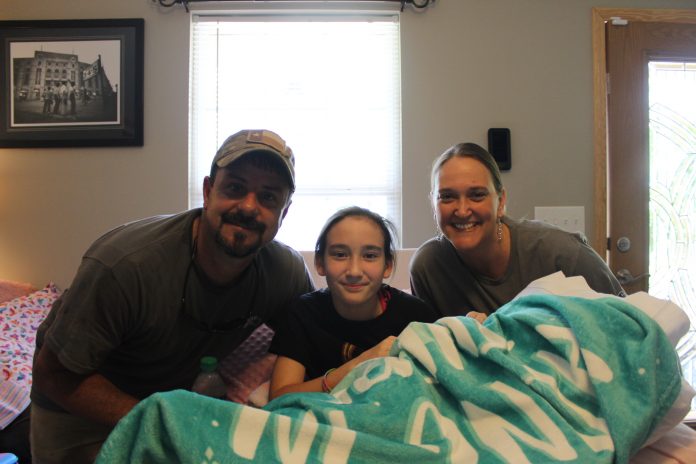 Because of the donation of a SteelSafe Storm Shelter from friends and anonymous donors, 11-year-old Beauregard resident Kayla Grimes and her family will have a safe, secure place to go when future severe weather hits Lee County.
Wayne Rogers, along with Wes and Whitney Croy of East Alabama Safe Shelters LLC, oversaw a successful installation of an in-ground shelter at Kayla’s home in Beauregard last Thursday. Kayla’s mother Michelle Gladden expressed her gratitude for the donation and said the shelter’s presence brings an “extra peace of mind.”
“This shelter means everything to us. We have been blessed by the love and support shown to our family, it truly is amazing,” Gladden said. “There are truly no words to explain it.”
Grimes was severely injured during the March 3 tornadoes, and lost her father Marshall, soon-to-be stepmother and best friend Taylor Thornton as a result of the storms. After a nearly three-week stay at UAB Hospital, she returned home in late March and has spent the last few weeks resting and recovering.
Rogers explained that a mutual friend of both his and Grimes’s family worked to make this donation possible. He added that he followed Grimes’s story in the days after the storm passed, and that finally meeting her in person and hearing her story was a moving experience.
“When I came out here to do the site inspection, I got to talk to her and it was a very emotional day for me. It was very eye opening to see how much devastation can happen to one person so early in life, yet have such a deep faith,” Rogers said. “I lost my dad last year and my wife the year before that so I know what loss feels like. But at (11) years old, it’s just hard to imagine.”
Grimes’ spirits are still high, and Gladden noted that she will begin physical therapy in the coming weeks as she continues the path toward a full recovery.
To learn more about the full list of products and services offered by Rogers’s company, call 334-610-1646 or like and follow “East Alabama Safe Shelters LLC” on Facebook.