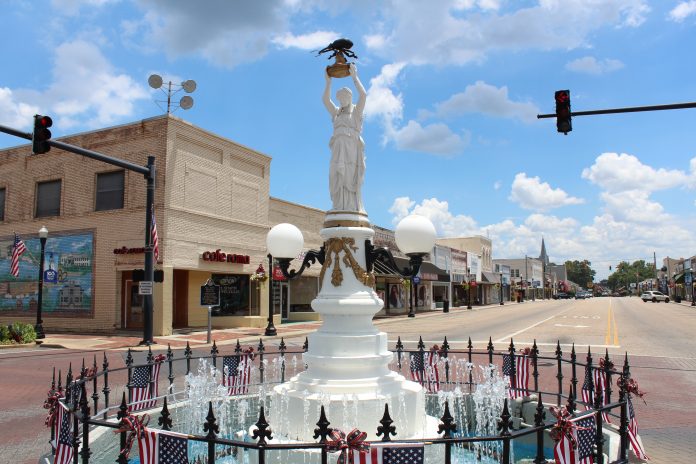 This year is the 100th anniversary of the Boll Weevil Monument in downtown Enterprise, which was erected to show appreciation to the insect, as it changed farming from cotton to peanuts. Growing peanuts brought prosperity to the farmers. While it reminds visitors of their agricultural past and present, it is the world’s only monument to an insect.

The monument features the statue of a woman holding a pedestal with an enlarged boll weevil perched on top. At the base of the monument appears the inscription: “In profound appreciation of the boll weevil and what it has done as the herald of prosperity this monument was erected by the citizens of Enterprise, Coffee County, Alabama.”[
The monument was dedicated on December 11, 1919 at the intersection of College and Main Street, the heart of the town’s business district. Enterprise is planning a celebration on Dec. 11 this year for the anniversary.
According to Ron Smith of Auburn University for the Encyclopedia of Alabama, “the weevils first entered the United States from Mexico in 1892. They reached Mobile County in 1910 and had infested the entire state by 1916. Alabama’s economy was almost entirely based in agriculture, with cotton being the primary cash crop, when the weevil arrived. During the first half of the twentieth century, the state’s economy was devastated.
“Some historians maintain that the boll weevil was the most important event in Alabama history until the mid-twentieth century, eclipsed only by the Civil War.”

The boll weevil caused farmers to switch from growing cotton to peanuts. One of my grandfathers was a peanut farmer in south Alabama. My mother grew up on the farm and remembered when her father would drive to town in one of the few cars in the area to pick up field workers. Mom and her sisters helped my grandmother prepare huge meals for the workers.

Mom remembered that they sold their peanuts to Planters. When she was a teenager, the family moved to Opelika.
Now, the Wiregrass is known as the “Peanut Capital of the World.” The 76th National Peanut Festival will be held in Dothan Nov. 1-10. It is the nation’s largest peanut festival and is held every fall to celebrate local peanut farmers and the harvest. The majority of all the peanuts grown in the United States are grown within a 100 mile radius of Dothan.

Dr. George Washington Carver was the guest speaker at the first festival held Nov. 10, 1938. Dr. Carver from Tuskegee Institute was known internationally for his development of over 300 products from peanuts.

The festival was held yearly through 1941 and then postponed until after World War II. It returned in 1947 and has been held annually every year.
Today, the event has grown to a ten day festival. A variety of family events are held, including concerts and agricultural attractions, among others.
The Peanut Festival is held on the fairgrounds in Dothan on U.S. Highway 231. The fairgrounds offer over 200 acres, two exhibit buildings, an amphitheater, an open air arena and an Ag complex.
For further information on the Peanut Festival contact 334.793.4323. For additional information on Enterprise’s Boll Weevil Centennial Celebration, go to VisitEnterprise.com or call 334.389.1554.
Following is a selection of recipes from the 2018 National Peanut Festival cooking contest and others in honor of Alabama farmers who still grow peanuts.

South Alabama Boiled Peanuts
2 to 3 cups raw peanuts in shells
1/2 to 1 cup salt
Water to cover
Wash peanuts and place in a stockpot. Add salt and water to cover. Bring water to a boil. Let them boil for three hours.
Taste the peanuts. If they are not salty enough, add more salt.
If the peanuts are not soft enough to suit your taste, boil them longer. Drain and serve. Store in refrigerator.

Oven Roasted Peanuts
2 cups raw peanuts in shells
Place peanuts one layer deep in a shallow baking pan.
Roast in a 350 degree oven for about 20 to 25 minutes. Remove one or two from the pan to test to see if they are roasted enough for your taste.
Homemade Peanut Butter
Place roasted peanuts to a food processor.
Process peanuts for about 45 to 60 seconds. Scrape sides of the processor bowl with a spatula and continue processing for 2 to 3 minutes. The peanut butter mixture will be smooth.
Can add salt, honey, maple syrup or brown sugar to taste.

Lower Alabama Peanut Butter Cookies
1 cup unsalted butter, room temperature
1 cup granulated sugar
3/4 cup light brown sugar
1 cup creamy or chunky peanut butter
3 cups all-purpose flour
2 large eggs, room temperature
1 1/2 tsp. vanilla extract
1 tsp. baking soda
1 tsp. baking powder
1/2 tsp. salt
1/3 cup granulated sugar, for rolling
Preheat oven to 350.
In a large bowl, cream the butter and sugars on medium speed until smooth.
Slowly add eggs and mix on high, making sure to scrape the sides of the bowl. Mix until combined, about 1 minute.
Add in peanut butter and vanilla, and mix until incorporated and smooth.
In a separate bowl, sift dry ingredients together. Pour into egg/peanut butter mixture and mix on low.
Cover dough and chill in refrigerator for 2-4 hours.
When ready to bake, line two cookie trays with parchment paper
Form balls out of the dough (balls should be comprised of about 1- 1/2 tablespoons of dough) and roll in a bowl of granulated sugar.
Place 2 inches apart on baking sheet and press the tines of a fork into the cookies to form crisscross pattern on top.
Bake until very lightly browned, about 10-11 minutes. Remove from oven and allow to cool.