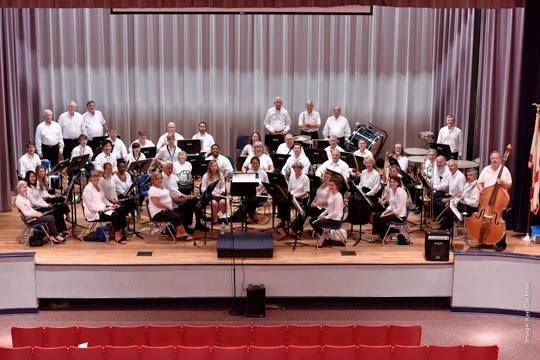 Musicians young and old have been convening locally in the East Alabama Community Band for six years to continue to practice and showcase their musical talents for the community.
Mary Slaton, a retired teacher and longtime musician, first had the idea to start a community band in the fall of 2011 when she needed a change from the piano.
“I’m a piano player, and I was kind of getting bored with that a little bit, and I thought, ‘You know, I would love to go back and start playing my French horn again,’” Slaton said.
After realizing the community lacked an outlet for people to continue their musical passions following school, Slaton decided to start the East Alabama Community Band to fill that vacancy.
At their first meeting in January 2012, the band had only five members. Slaton said one of the most difficult challenges was finding a place to practice, as well as finding necessary equipment. The first official practice took place March 5 at the Cultural Arts Center of East Alabama, and the band practiced there for the first two or three years before they grew and had to switch to what was then the Auburn High School band room.
“I remember that first year, one night we had five people to come for practice, and we practiced. We just weren’t going to give up,” Slaton said. “I think that’s the main thing—everybody that’s been concerned with it, they’ve really been determined that it’s going to keep going. We’ve had a lot of support.” According to Slaton, the band had two or three concerts their first year. In the beginning it was difficult to fill out the band, so many players had to fill in at the last minute. However, the band’s hard work paid off—at the end of their first concert, they received a standing ovation.
Today, the band has grown to include 40 members, and Slaton said the caliber of the band has continued to rise since its inception.
“There’s a flux of people that have … been there for the whole six years,” Slaton said. “It’s all ages—we have some as young sometimes as 14 or 15, and then we have some as old as 73. People have kids, they move away, but we’ve managed to replace the ones that have moved away or whatever, and so we’ve been real lucky.”
The band has players from a 50-mile radius, including people from Tuskegee, Alex City and Phenix City.
“Several of the other bands that have been started around [surrounding communities] … they lost a lot of people, and so they had to shut it down, so I feel real excited that we still have a band and [are] doing well,” Slaton said.
The first director for the band was Michael Marcades, a minister of music from Opelika First United Methodist Church. Other directors have included retired AHS band director Rusty Logan, Mike Stough and David Alexander, who has served as the band’s director for the last two years.
Slaton said the band is planning a concert in April and will return to Monkey Park on May 15 for the Summer Swing concert series.
The East Alabama Community Band practices on Monday nights from 6:30-8 p.m. at the Auburn Junior High School band room, and Slaton said they welcome anyone who wishes to join, no matter how long it has been since they played their instruments. For more information, visit the band’s Facebook page.