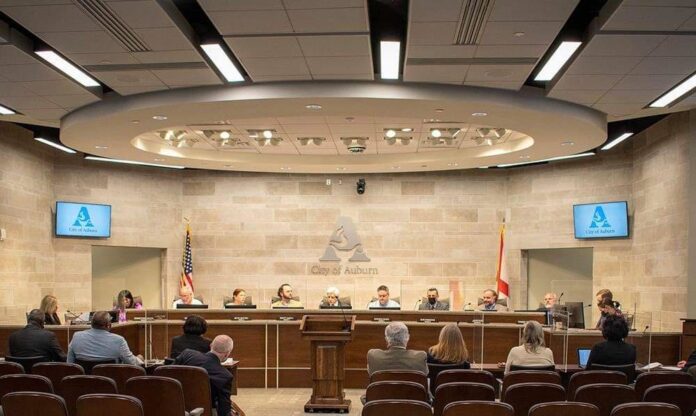 The Auburn City Council has yet to name a replacement to finish out former Ward 4 Council Member Brett Smith’s term.

Smith moved to Florida which means the council has to appoint a new member. However, in discussion tonight, the council could not vote on a candidate with a five-member majority and pushed the vote to the June 21 meeting.

There were four Auburn Ward 4 residents who showed interest in serving as the replacement until November: Ray Huff, Ethan Purdue, Jennifer Stevens and Brent Beard.

At the last council meeting, Auburn Mayor Ron Anders said that he would encourage anyone who wanted to fill this spot to not run for the seat in the August election, saying that would be an unfair advantage to other candidates.

Beard is a former Auburn City Council member who served four previous terms. He chose not to run in 2018.

“I believe with the short time that this person will be serving the city of Auburn, four months, having an experienced member sit up here with us and go through these decisions is advantageous,” Anders said.

Anders, along with other council members, such as Ward 3 Council Member Beth Witten, said that Beard will be advantageous during the budget process, which will begin next week, given his experience on the council.

“I found him to be a very honorable man, very honest,” Dawson said.

Huff, who was nominated by Dixon, is an Auburn businessman who has also served on several boards and commissions before, said Ward 2 Council member Kelley Griswold.

“He’s an experienced businessman; he has a lot of experience with budgets,” Griswold said. “… He has an expressed an interest in serving for this brief period of time and I endorse his nomination.”

Dawson said that while he found Huff to be “a very good man” he would be supporting Beard due to his experience on the council.

The council took a vote and there were four votes for Beard and three for Huff, given Ward 6 Council Member Bob Parsons was not in attendance. There must be five votes for a candidate to be approved, said City Manager Megan Crouch.

Ward 3 Council Member Beth Witten asked for a re-consideration of Beard as a nomination, citing his experience, his familiarity with the job and how this would benefit the budget process.

“Based on the fact that we have a duty to have a representative for Ward 4 and that both candidates, or nominees, are very viable candidates, but one having served in the past and having served with a lot of grace, and dignity and positive representation for the city, I would like this council, this body, to reconsider Brent Beard,” she said.

The vote, when re-taken, did not change, however.

Ward 1 Council Member Connie Fitch Taylor said that she had no knowledge of Beard but did receive contact and a resume from Huff. So based on that knowledge, she supported Huff.

The council considered next steps, including waiting for Parsons to return and what happens if the vote turns into a 4 against 4 vote.

In that scenario, the seat would likely remain empty, Crouch said. The item will appear before the council again on June 21.