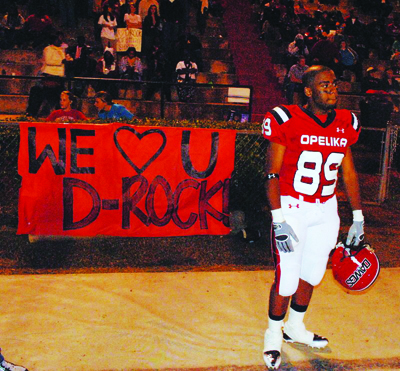 There were many cheers in the stands during Opelika’s thundering victory over Parker last Thursday, but none seemed so loud as the ones when No. 89 took the field.

Thursday’s game was the first night No. 89 had seen play this year, unusual for a graduating senior.

Then again, No. 89 was no normal Bulldog: he’s Deavante “D-Rock” Ross, the team’s long-serving team manager, and this was finally his time to shine on the field he’s wanted to play on for so long.

“I mean, I’d been thinking about playing football for about nine years or so, helping the team and doing whatever I can do,” D-Rock said. “I just like being around the game.”

This year, D-Rock approached offensive coordinator Brian Moore about possibly playing for the team in a game this year.

Coaches, teachers and school officials worked for months to make sure D-Rock could clear eligibility with the state high school athletic association. He was cleared in good standing for eligibility, allowing his appearance in the plays he made during the Parker game.

“He’s always willing to lend a hand, and is one of the biggest Bulldog fans ever,” April Halverson, one of D-Rock’s teacher’s said. “I wish we all had just an ounce of the heart and dedication D-Rock has; he’s an encourager to everyone he meets.”

Halverson and other teachers and students made signs to hold during the game, letting D-Rock know he had a “huge support base” in the stands cheering him on.

Signs in the student section were littered with slogans such as “I love D-Rock more than shopping.”

D-Rock participated in one offensive play during the Parker game, a play coaches had named the Sugar Diamond D-Rock.

“I had three blockers, and was just told that when I got the ball, I should just follow those blockers and go. That’s what I did,” D-Rock said.

D-Rock helped the Dawgs gain six yards on the play, saying the cheers he heard during the play didn’t hit him until after.

“Hearing the cheers, it made me feel like Cam Newton when he came up to be quarterback,” D-Rock said. “I still get happy just thinking about it.”