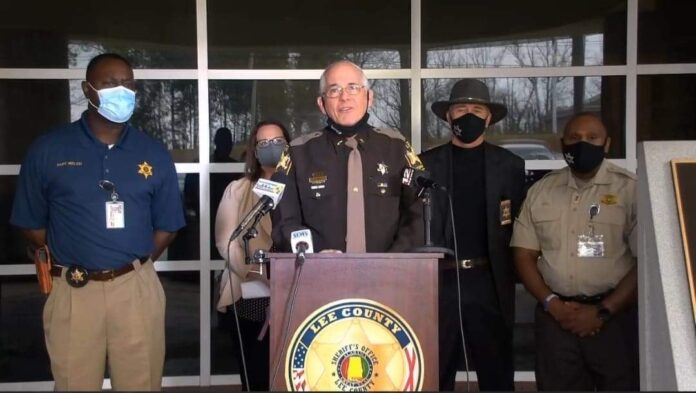 Sheriff Jay Jones called a press conference Feb. 10 to announce that Lee County Sheriff’s Investigators arrested D’Mario Jones, a corrections officer who had been working with the sheriff’s department for seven months, for supplying an inmate with cell phones on multiple occasions.

D’Mario Jones was arrested on Feb. 9 on two counts of Promoting Prison Contraband 1st Degree, which is a class C felony and could yield a sentence of 10 years in state prison. Bond was set at $10,000, and D’Mario Jones was released on bond within 24 hours. The investigation is still going on.

According to a release from the sheriff’s office, evidence indicates that D’Mario Jones, on multiple occasions, was providing cell phones and related equipment to an inmate in exchange for payments (of an amount not available to the public) from family members of the inmate. The sheriff said that he expects the arrests of other individuals involved.

“In this particular case, we have an individual who took an oath to not only preserve the law, but to protect the community,” Jay Jones said. “And unfortunately, in this case, that oath was broken. We take that very seriously.”

Jay Jones added that other employees were responsible for the alleged crime being brought to light.

The sheriff’s department asks anyone with information about this case or any other to contact the Lee County Sheriff’s Office at 334-749-5651 or Central Alabama Crime Stoppers at 334-215-STOP (7867).