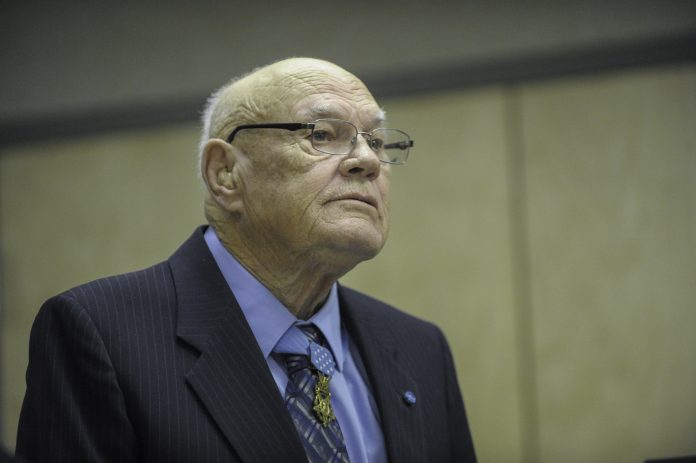 Opelika resident and Medal of Honor recipient Ret. Command Sgt. Maj. Bennie Adkins, 86, passed away Friday afternoon.
Adkins tested positive for COVID-19 and was listed in critical condition at East Alabama Medical Center on March 26. He had been recuperating the last three and a half weeks but his condition worsened on the morning of April 17 and passed away at approximately 3 p.m.

“We are deeply saddened to notify you that after a courageous battle with COVID-19, Command Sergeant Major Bennie G. Adkins departed this life today, with beloved family at his bedside,” family members wrote Friday in a post on The Bennie Adkins Foundation Facebook page.
As of press time, no funeral arrangements had been announced.

Background
Born on Feb. 1, 1934 in Waurika, Oklahoma, Adkins spent much of his childhood in Opelika. He was drafted into the U.S. Army on Dec. 5, 1956, completing his basic training at Fort Bliss in Texas. Afterward, he was assigned as an administrative clerk/typist to a garrison unit in Giessen, Germany and had a “follow-on assignment” with the 2nd Infantry Division at Fort Benning.

While at Fort Benning, Adkins attended Airborne School and started volunteering with the Special Forces (Green Berets) in 1961, eventually serving with four groups in his 13-year stint with that branch.
Adkins served three non-consecutive tours to the Republic of Vietnam during his time with the Special Forces, most notably his 1965-1966 tour.

From March 9 to 12, 1966, Adkins and his fellow soldiers at A Shau Special Forces Camp in the A Shau Valley endured an onslaught of attacking Vietnamese forces. He willingly placed himself in the line of fire to save the lives of several of his comrades, receiving more than a dozen injuries and spending the next 36 hours fighting with hand grenades, mortars, machine guns, rifles and small arms, killing an estimated 135 to 175 enemy soldiers.

Adkins’ final Special Forces tour of duty in Vietnam came in 1971, serving from January to December.
After Vietnam, Adkins would make stops at military bases in at Fort Huachuca in Arizona, Army Sergeants Major Academy in El Paso, Texas, Fort Bragg in North Carolina and spent the last of his Army career leading training at Fort Sherman’s Jungle School near the Panama Canal. He would officially retire from the Army in 1978.

Fresh off his retirement from the Army, Adkins focused on education, earning three degrees (one bachelor, two master’s) from Troy University, then known as Troy State. He later opened his own accounting business based in Auburn, where he served as CEO for 22 years.
In addition to being a small business owner, Adkins taught night classes at Southern Union State Community College and Auburn University for more than 16 years combined.

Prior to receiving the Medal of Honor, Adkins had received numerous awards and spotlighted by numerous publications.
On April 26, 2013, Adkins received the Legion of Valor medal, and soon was recognized by Opelika Mayor Fuller the Opelika City Council during a meeting.

In late August/early September 2014, word began to circulate that Adkins was going to be named a Medal of Honor recipient. He, his wife Mary, family and close friends like Lee County Commissioner Johnny Lawrence made the trek to Washington D.C. where he received the prestigious honor from then-U.S. President Barack Obama. The following day, Adkins received the Medal of Honor flag at an induction ceremony into the Pentagon’s Hall of Heroes.

Six months later, a bronze bust of Adkins was unveiled at a special ceremony at the Opelika SportsPlex. Also in 2015, the USPS created a commemorative stamp that bore his likeness.
Adkins collaborated with local author Katie Jackson in 2018 to write a book about his experiences at Camp A Shau titled “A Tiger Among Us: A Story of Valor in Vietnam’s A Shau Valley,” which is available for downloads or purchases with most major book retailers.

Family
Mary, Adkins’ wife of more than 60 years, passed away last February. She was buried at Arlington National Cemetery.
Together, they had five children, three of whom are still living: Mary Ann Adkins Blake (David) and sons Michael Adkins (Christine) and W. Keith Adkins (Jaime) and many grandchildren and great-grandchildren. They were preceded in death by their sons Dennis and Wayne.

Numerous individuals shared their thoughts and memories of Adkins on the foundation’s Facebook post announcing his death, as well as many local dignitaries and leaders who posted their remorse over his passing on social media, including U.S. Rep. Mike Rogers and Lee County Sheriff Jay Jones.
“Rest in peace, Bennie Adkins. Heaven’s gates have never been more secure,” Rogers said.
“This man stands for and is an examples of all that is right, just and pure about our great nation. He is and will forever be a hero,” Jones wrote. “He was devoted to his family, his comrades in arms and his friends. If you ever had the honor of meeting him, you learned quickly that his thoughts were not of himself but of others to whom he always gave the credit. If you wish to know what a great man looks like – just (look at him).”

Carrying on a legacy

According to a description on bennieadkinsfoundation.org, the 501c3 nonprofit organization’s “aim is to carry on the legacy of Bennie Adkins by providing educational scholarships to Special Forces soldiers. Our hope is to reward deserving soldiers who have demonstrated the courage, sacrifice, and patriotism inherent in the Special Forces, and aid them as they continue trying to improve themselves through education.”